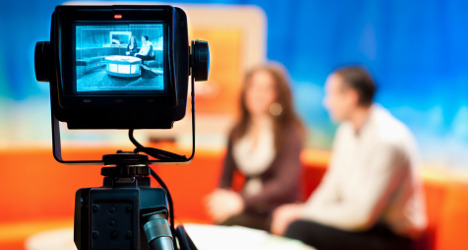 Dozens of TVE public television journalists staged a sit-in on Friday outside of the office of the new head of news, José Antonio Álvarez Gundín, who just arrived from right-wing daily newspaper La Razón to protest his decision to reshuffle the daily newscast team.

An association representing editors and journalists of the newscast said it feared "these changes could mask the intention of imposing an even greater control on news".

By removing certain members of the team Gundín was "breaking the backbone of the televised newscasts," the association added. Spain's two biggest trade unions have also weighed in. The country's biggest union, Comissiones Obreras, said the reshuffle was "a clear attempt to exercise greater control and manipulate the news".

The General Workers Union, Spain's second-largest union, said TVE's newscasts had been "taken hostage". It argues Gundín's appointment was "imposed" by Rajoy's Popular Party, in power since December 2011.The new management of the public broadcaster "is scared to death that professionals could behave as such and not like puppets as several elections
approach" in 2015, the union added.

Contacted by news agency AFP, public broadcaster RTVE, which includes several radio and television stations, declined to comment but noted that Gundín's appointments were all journalists with long ties to the institution.

The malaise is not new. It has rumbled on since April 2012 when Rajoy's government changed a law which had required that the appointment of a new president of the public broadcaster be backed by at least two-thirds of lawmakers. Now a simple majority is all it takes on a second vote.

Rajoy, whose Popular Party has an absolute majority in Spain's 350-seat parliament, said the change was needed to end a "situation of paralysis" after lawmakers could not agree for over a year on who should head the broadcaster.

In October the government used its parliamentary majority to appoint a new chief at RTVE, which employs around 6,000 people, after the previous head, who was also contested, stepped down.

The arrival of José Antonio Sánchez, who previously served as director general of RTVE between 2002 and 2004 before heading Telemadrid, a regional station that serves the Spanish capital and surrounding region, was heavily criticised by journalists at the broadcaster.

They accuse Telemadrid of being manipulated by the Popular Party, which governs the Madrid region, under his watch. Sanchez has promised to promote "plurality and objectivity" at the station, which since 2009 is no longer supported by adverts and relies entirely on the government for its funding.

Budget Minister Cristóbal Montero has defended his appointment to the helm of the broadcaster. "He has barely begun and he is already held responsible for every ill," the minister said last week.

Journalists at the station point to the fact that TVE has not yet interviewed the leader of a new left-wing anti-austerity party Podemos as proof that the station is biased.

The Podemos leader, university professor Pablo Iglesias, is a frequent guest on Spain's private television stations. "Manipulation and censorship have caused TVE's credibility to plunge," reads a petition signed by 1,500 employees of the public broadcaster.

The accusations of manipulation are not limited to the Popular Party. In Spain's wealthy northeastern region of Catalonia, a union representing journalists at local public station TV3 have accused it of favouring the separatist initiatives of the regional nationalist government.

"We can't trick citizens by offering them propoganda instead of news," the union wrote.