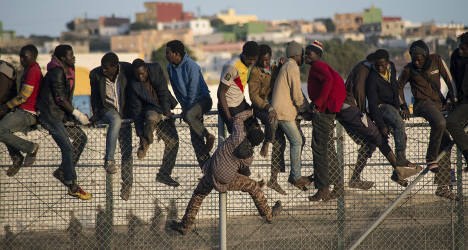 The secretary of the bishops' commission on migration has joined hands with several other Catholic organizations including the charity Caritas to denounce the proposed change.

The Spanish government in October announced that it would include a legal amendment in its planned new Citizen Security Law authorizing police to expel migrants who climb the fence around Melilla and Ceuta, without giving their asylum claims a hearing — a move slammed by opposition parties.

But the Catholic groups on Monday expressed their "energetic rejection" of the plan saying in a statement that any such changes would effectively make borders "a human rights-free zone".

They said the new law would only increase people's suffering and would not provide solutions for the people "who abandoned their countries of origin, to, after an arduous journey, arrival at the borders of Ceuta and Melilla".

Spain has since responded by announcing it will create "centres of attention for asylum seekers" at border posts in the enclaves of Ceuta and Melilla.

The Interior Ministry said that the plan to build special asylum posts, to be put into action in the coming months, “will strengthen the system of international protection and meet more fully the requirements of the Common European Asylum System”.

A spokesperson for the UN said in late October that around two thirds of those trying to cross the seven-metre (23-foot), triple-layer border fence into Melilla were from countries torn by war, violence and persecution, including Syria, Central Africa Republic and Mali.

"So far this year, over 5,000 people have arrived, including 2,000 people fleeing the conflict in Syria, of whom 70 percent are women and children," he added.