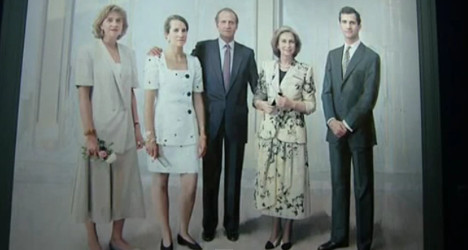 "In this case the delay was probably excessive," Spanish realist painter Antonio López joked of the delay to the painting officially unveiled at Madrid's Royal Palace on Wednesday.

In 1994, López was given the brief to paint the Spanish royal family, which then consisted of King Juan Carlos and Queen Sofia and their three children, the Princess Elena, Princess Cristina and Prince Felipe.

Much has changed in those 20 years: Prince Felipe is now King Felipe and all three children are married with families of their own.

King Felipe, on seeing the painting for the first time, reportedly exclaimed, “We are all how we were 20 years ago!” according to Spanish newspaper, El País.

A celebrated artist both in Spain and internationally, López, who is known for his nude paintings, explained to El País the area he struggled with the most was the clothing.

“Queen Sofía was portrayed in a pink dress…that at one point wasn't working for me. I asked her to repeat the photos…and she came to my house with three different ones in a bag. She posed again and I restarted the portrait…But later on I decided to return to the original dress, the one you can see in the painting.”

The delay could also be explained by the fact that López usually paints with the subject sitting in front of him, whereas with the Spanish royal family, he worked from a set of photographs.

Titled, ‘Portrait of the family of Juan Carlos I (1994-2014)’ it is on display to the public as part of the exhibition 'The portrait in the royal collections. From Juan de Flandes to Antonio López', at Madrid’s Royal Palace until April 19th.