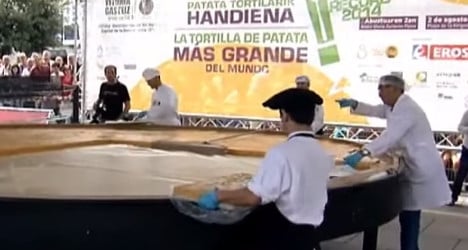 The tortilla contained a whopping 10kg of salt and 150 litres of olive oil. Screen grab: Nostubeyo1/Youtube

The Guinness Book of Records has reportedly rejected the attempt to make the biggest tortilla in the world because it did not accept the way in which it was cooked "in precooked portions and assembled like a puzzle".

Chefs fried the potato, egg and onion mixture in normal-sized pans, making rectangular slabs of omelette that were then fitted together to make one gigantic tortilla.

Antxon Belakortu, of Basque nationalist party Bildu, referred to the attempt as "a circus" while Patxi Lazcoz, of the Basque wing of Spain’s Socialist party, called the whole episode a "scam" and said Vitoria would now be christened "the capital of the ridiculous" in the national and international press.

The mayor of Vitoria with Spain's ruling Popular Party, Javier Maroto, told journalists he did not yet have official notification of the rejection from Guinness but maintained that just to have attempted the record was something "positive" and "worth the effort".

The tortilla consisted of 840 kilos (1850lb) of eggs, 1,600kg of potatoes, 30kg of onion, 10kg of salt and a whopping 150 litres of olive oil, providing 10,000 portions for the hungry hoards that crowded into the Plaza de Virgen to watch the spectacle.

The attempt took place on August 2nd under the watchful eye of young Spanish chef, Senén González, who received a 2010 Spanish award for best tortilla.

González tweeted of his glee after the event and will no doubt be disappointed if Guinness fail to confirm the record attempt.

This is not the only Spanish food-based record that Guinness has presided over.

In 2013 a 5,000-litre gazpacho, a cold tomato soup usually eaten during the summer, was made in Lisbon, Portugal.

The most expensive leg of ham commercially available is also, of course, Spanish and is the 7kg heavy Albarragena Jamon Iberico de Bellota, which will set you back £1,800 (€2,682) in Selfridges food hall in the UK