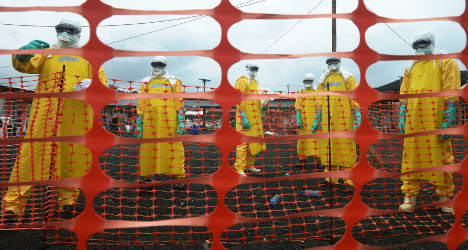 Workers inside the contaminated area at the Elwa hospital manned by Médecins Sans Frontières (Doctors without Borders), in September in Monrovia, Liberia. File photo: Dominique Faget/AFP

The Spanish Ministry of Health confirmed the news in a press release on its website, stating, "Our country is free of the the virus".

The World Health Organization declaration comes 42 days after the blood tests of infected Spanish nursing assistant Teresa Romero — the first person known to have contracted Ebola outside Africa — came back negative for the virus.

Romero's infection was confirmed on October 6th. A heath worker at Madrid's Carlos III hospital, she had been part of the team treating Spanish missionary Manuel García Viejo, who was repatriated to Spain from Sierra Leone with the disease in September and later died in hospital.

After Romero contracted Ebola, 87 people she had been in contact with were put under observation, while 15 high risk contacts were quarantined in hospital. None developed symptoms of the virus

Since Romero's infection, there have been no further cases of Ebola being contracted within Spain.

However, Spain's handling of its Ebola crisis was not without controversy. Former Spanish health minister Ana Mato was sidelined after the government set up special committee to deal with the management of the Ebola situation.

There were also calls for Madrid's regional health boss Javier Rodríguez to resign after her accused Teresa Romero of lying about the state of her health in initial consultations with medical professionals.

He went on to make comments like "You don’t need a Masters to learn how to put on and take off a suit" and "Some people are better at learning than others", in reference to suggestions Romero may have contracted the illness while falsely removing a protective suit.

On November 26th, the Who reported there had been 5,689 deaths from Ebola in the current outbreak with the majority in Guinea, Liberia and Sierra Leone.

COVID-19
Pandemic in Europe won’t be over until 70 percent are vaccinated, says WHO

COVID-19
Covid-19 cases in Europe back on the rise after weeks of decline
Url copied to clipboard!