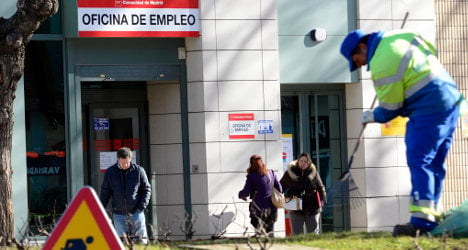 This is the best November figure since 1996, or since current records began, according to Spain's employment ministry.

Unemployment has risen by an average of 64,000 in November in the last six years.

In seasonally adjusted terms, unemployment queues in November shrunk by 51,308.

The institute recorded 5.43 million unemployed in Spain at the end of September, yielding an unemployment rate of 23.67 percent.

The high figure reflected the lingering impact of the busting of a construction bubble in 2008, which sparked five years of stop-start recession in the eurozone's fourth-largest economy.

Spain's economy grew by 0.5 percent in the third quarter compared with the previous three months, its fifth consecutive quarterly growth, according to final figures from the statistics office released on Thursday.

The economy grew by 1.6 percent over the past 12 months, up from the 1.3 percent year-on-year increase registered in the second quarter.