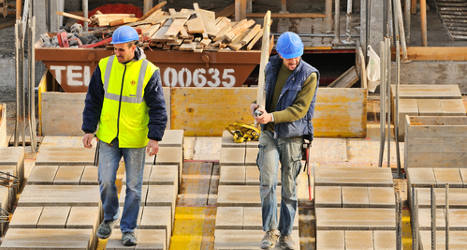 Workers on building site: Shutterstock
Permanent migration into OECD countries has begun to rebound, up 1.1 percent in 2013 to reach around four million new permanent immigrants, the OECD's new 2014 International Migration Outlook reveals.
Germany is now the favoured location for immigrants in Europea notching up a double-digit increase in 2013, the report shows.
However, the report said that migration flows to Spain and Italy had declined "rather markedly", reflecting the ongoing economic situation. Despite Spain exiting recession in 2013, the country still has an unemployment rate of 23.67 percent.
Among foreigners that figure was 36.5 percent at the beginning of 2013.
Spain and Italy "which were second or third largest immigration countries in the OECD from 2007 to 2011, now hold seventh and eighth positions."
Spain welcomed 691,000 permanent migrants in 2007 but just 209,800 in 2012. The total number of people entering the country in 2012 was 336,100, down from 416,300 a year earlier.
The country used to bring large numbers of seasonal workers but now brings in less than 10,000 a year, the report noted, while the construction insd
"Hiring non-resident foreign nationals has been restricted and priority given to foreign nationals already residing in the country," the report's authors added.
While China remains the biggest contributor of migrants, according to latest figures from 2012, the origins of others tend to wax and wane.
Romania, Poland and India were the next biggest contributing nations.
The report noted that the economic crisis had hit immigrants "disproportionately hard" but that despite the downturn, most foreigners were still employed.
"Of the additional 15 million unemployed in the OECD since 2007, about one in five is foreign-born."
The report urged member states to harness the skills of immigrants, who often struggle to land jobs because of language skills or different qualifications which are often undervalued.
"Today's migrants are better educated than their predecessors. The number of foreign-born who are highly-educated has grown by 70 percent over the past decade to exceed 31 million in the OECD area." said the report.
"The underutilization of immigrants' skills is a waste of resources that OECD countries can scarcely afford."
The OECD said that discrimination also made it tough for immigrants to get ahead, with studies showing candidates applying for an interview with an immigrant-sounding name "have to submit twice as many applications as people who have similar qualifications and experience but a name with a native ring to it."
Just 2.9 percent of Spaniards see immigration as one of the country's top problems, according to polls carried out by government research centre CIS.