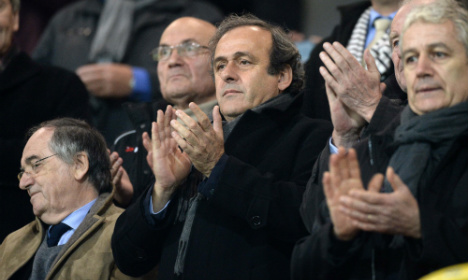 Ronaldo won the Ballon d'Or for world player of the year in 2013 and has been widely tipped to retain the title for this year after his prolific record in front of goal helped Madrid win the Champions League and the Copa del Rey.

However, the 29-year-old forward had a disappointing World Cup with Portugal as his country were eliminated in the group stage.

In a statement, Madrid expressed "surprise at (Platini's) repeated remarks regarding his personal preferences for who should win the Ballon d'Or, especially when he is at the head of the leading body in European football, where we understand that strict neutrality should always prevail.

"Secondly, the Ballon d'Or is an individual prize and not a collective one that is given every year to the best player in the world and we believe that, to maintain its prestige, those who vote should take into account only the individual professional merits of the players.

"And finally, we believe without doubt that Cristiano Ronaldo has had the best year of his professional career from an individual point of view, as well as winning the Champions League, the Golden Boot, setting the record for the leading scorer in a Champions League season, winning the Copa del Rey and being top scorer in the Spanish league."

They added that he would be "deserving more than ever of winning the Ballon d'Or."

On Wednesday, Madrid-based sports daily AS reported Platini as saying that a German should win the prize.

"I already said it four years ago. A Spaniard should have won it then because Spain had won the World Cup (in 2010). This year it is Germany," he said.

As well as Ronaldo and Lionel Messi, who had won the Ballon d'Or four years running before missing out in 2013, six members of the Germany side that triumphed in Brazil are on the shortlist.

Mario Goetze, scorer of the winning goal in the final against Argentina, and Real Madrid's Toni Kroos are nominated along with Philipp Lahm, Thomas
Müller, Manuel Neuer and Bastian Schweinsteiger.

UEFA has nothing directly to do with the Ballon d'Or, which is awarded by world governing body FIFA after votes from coaches and captains of international teams, as well as journalists from around the world.