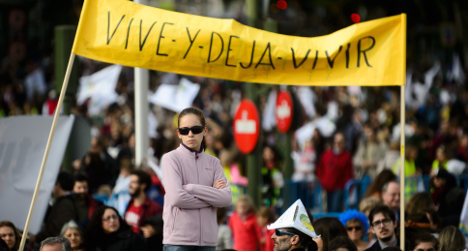 Demonstrators hold a banner reading "live and let live" during a march against abortion in Madrid on November 22, 2014. Photo: Dani Pozo / AFP

Although the conservative government of Spanish Prime Minister Mariano Rajoy decided last summer not to proceed with its plans to introduce a draconian reform to the country’s abortion laws, it still intends to change one aspect of the legislation on terminating unwanted pregnancies.

Currently, 16- and 17-year-olds can have an abortion without the knowledge and consent of their parents, if the doctor consulted feels that involving the family could create difficulties for the girl.

The Rajoy government, whose former justice minister, Alberto Ruiz-Gallardón, resigned in September when his draft reform which removed women’s freedom to decide in the first three months of pregnancy and instead sought to reintroduce restricted exceptions to allow rape victims and women whose health was in danger to abort, has introduced a clause into a draft bill on child protection in a bid to make parental consent essential in all cases involving a pregnant minor.

Without using the word abortion, the clause states that parents must always have the final say on medical operation involving under-18s.

The State Council, an advisory body which reviews government legislation, has criticized what it describes as a last-minute attempt to change the existing 2010 law with a vague clause in a reform which has nothing to do with the issue of terminating unwanted pregnancies.

According to the daily El País, the State Council’s report on the planned reform says that the proposed change "would only cover situations in which ordinary laws require parental consent", and not the country’s specific abortion legislation as laid down in the former Socialist government’s 2010 law.

Deputy Prime Minister Soraya Sáenz de Santamaría responded by saying on Friday that the Popular Party government "remains committed to changing the law so that minors are accompanied by their parents at such a difficult moment". But she added that the government would need to consider the "most appropriate" legal route to bring about this change.