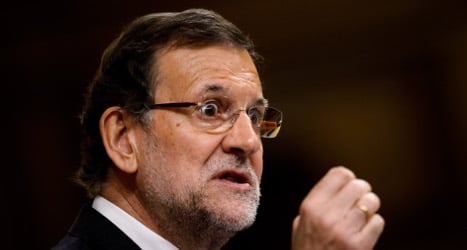 Speaking in parliament the morning after his fellow Popular Party (PP) member, Ana Mato, was forced to resign from her post as health minister after being named in a judge’s report as a beneficiary of political kickbacks, Prime Minister Mariano Rajoy denied that corruption was generalized in the country, but admitted that the number of recent cases "discredited Spain".

"Spain is not corrupt; it has some corrupt people [in cases] which are coming to light," Rajoy said.

Mato resigned after an investigative judge recommended that she participate in a trial which will see alleged members of the so-called Gürtel kickbacks-for-contracts case face corruption charges.

Mato’s former husband, Jesús Sepúlveda, is one of 43 people Judge Pablo Ruz wants to put in the dock. Sepúlveda, who was the PP mayor of upscale Madrid dormitory town Pozuelo de Alarcón, is accused of accepting gifts from Gürtel network businessmen, with the former minister and the rest of the family also benefitting from free travel and other expenses being paid.

According to revelations published in Spain's El País and El Mundo newspapers in 2013, Rajoy is among a number of high-ranking PP politicians who received illicit cash payments in the 1990s and 2000s as part of a corrupt system of donations from companies which were not registered — a claim the Spanish prime minister has always denied.

A former PP treasurer, Luis Bárcenas, is in prison while a judicial investigation continues into his alleged money laundering activities.

In parliament on Thursday, Rajoy outlined new measures aimed at making it harder for officials to be corrupted, including the creation of a specific crime to cover "illegal party financing".

The prime minister said that the party members should get the opportunity to elect the leadership group every four years, and that those convicted of offenses related to corruption must be expelled from office.

Rajoy said he could "understand people’s irritation and mistrust" toward politicians but that these feelings did not "justify a generalization of suspicion".

He said that the reforms being put before parliament would go a long way to preventing future scandals. "It will be much harder to be corrupt when these laws that I bring to parliament are passed."

"I want those who are corrupt to pay for it," sad the prime minister, who has twice apologized publicly for corruption involving PP officials since he took office nearly three years ago.

The conservative leader called for an agreement on draft anti-corruption bills, as well as presenting amendments to reforms presented to parliament in 2013 but which have yet to be approved. These proposed changes include promoting greater transparency and control of the salaries and expenses of civil servants.

But the leader of the main opposition Socialist Party, Pedro Sánchez, said that Rajoy was not the right man for the job of banishing corruption. "You're not in a position to deal with the renewal of democracy that Spain is calling for; you haven't the capacity nor the legitimacy to do it," said Sánchez, whose own party is also embroiled in corruption cases, notably in Andalusia.

Joan Coscubiela of the Catalan leftist-Green ICV group went further, taunting Rajoy as the man at the centre of political corruption. "You have spent years at the epicentre of the biggest corruption case ever," Coscubiela said.

"You, Mr Rajoy, are the Mister X of coruption. This country does not deserve to have a leader who heads a party rotten with corruption. You are in no position to carry on."

A new party, Podemos, has begun to top opinion polls in part thanks to its claims that it will stop corruption and bring transparency to Spanish politics.  Charismatic leader Pablo Iglesias on Thursday called for Rajoy to resign and for general elections to be brought forward.