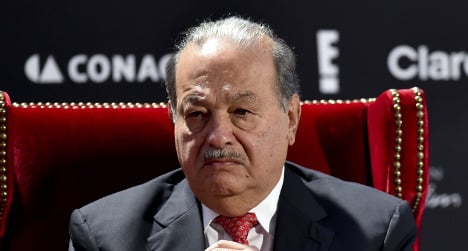 Slim's holding company reached a deal with the firm's current top shareholder, Esther Koplowitz to buy all of her rights to participate in a €1 billion ($1.25 billion) capital increase, FCC said in a statement.

Slim will hold a 25.64 percent stake in the company following the capital increase while Koplowitz, who inherited the building group from her father, will see her stake reduced to 24.42 percent from 50.02 percent.

"With the funds attained through the capital increase, FCC will bolster its equity situation, reduce its debt and improve its results by substantially reducing its financial burdens," the company said in a statement.

The deal follows months of talks with several potential investors, including with billionaire investor George Soros, who had been in exclusive talks with Koplowitz as late as last week.

Soros became a shareholder of FCC in January after acquiring about four percent of the struggling group.

FCC, which employs 80,000 people in 56 countries, is desperately seeking investors as it is laden with a mountain of debt — which amounted to €6.43 billion at the end of September 2014.

A property boom lasting a decade had driven the construction company to invest heavily, but the market collapsed in 2008, leaving it with staggering debt.

The company has sought to diversify its business into sectors other than construction and now gets most of its earnings from environmental services such as waste management.