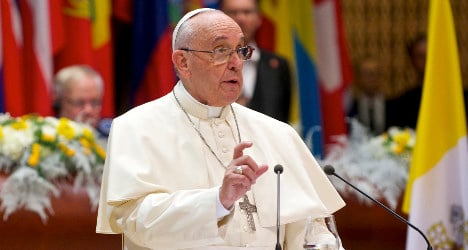 Pope Francis addresses the assembly of the Council of Europe in Strasbourg, France on Wednesday. Photo: COE/AFP

The comments came during a return flight to Rome from Strasbourg where the Pope had appeared before the European Parliament, Spanish daily El País reported.

Speaking about the case involving alleged abuse of minors by a ring of paedophiles in Granada, Pope Francis said: “How am I coping with this? With great pain, enormous pain. But the truth is the truth, and we mustn't hide it."

The Pope also confirmed he had instigated the investigation which has seen a Granada judge targeting 10 priests and two laypeople. The group allegedly drew boys into their sphere of influence by taking them on as altar boys or assistants before sexually abusing them.

Three priests and a teacher have been arrested to date and began appearing before a judge on Wednesday morning after refusing to speak to police, local daily Ideal reported.

On Wednesday a second ex-altar boy filed a police report saying he had been a victim of sexual abuse by the paedophile ring. This second testimony is considered key in terms of bolstering the case against the alleged abusers given the lack of other evidence, according to El País.

The four men already arrested were gathered in a chalet owned by the alleged head of the ring when police officers arrived to detain them on Monday.

Officers confiscated two computers in the property but found contents had been deleted. Ideal also reported that priests had recently reported a theft of other computers from the chalet.

Technicians will now work on scouring the hard drives seized in a bid to retrieve data including emails and photographs.