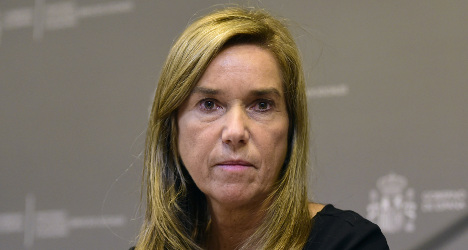 The judge did not name Ana Mato as an official suspect in the corruption case but said he she benefitted from alleged illegal activity. File photo: Dani Pozo/AFP

Mato's resignation came after a judge investigating an alleged kickback scheme at the heart of the Spanish prime minister's conservative Popular Party ruled on Wednesday that there was enough evidence to try over 40 people for corruption.

The massive bribes for contracts scheme, known as the "Gürtel" case, allegedly extended to six regional Popular Party governments and operated between 1999 and 2009, when the investigation began.

High Court judge Pablo Ruz "has concluded the backbone of the investigation of the so-called 'Gurtel' case and understands that there is enough evidence to put in the dock 43 people," the court said in a statement.

Among the 43 are three former treasurers of the Popular Party and Jesus Sepulveda, the former mayor of Pozuelo de Alarcon, an upscale Madrid suburb, whose former wife Ana Mato was Spain's health minister.

While Mato has not been named as an official suspect in the case, the judge concluded she "benefited from, alone or in the company of other members of her family unit", the holidays, cash payments and other gifts allegedly given to her ex-husband and was therefore civilly liable.

On Wednesday evening, Mato bowed to pressure to resign. In a statement, she said she was doing so "in order not to damage the government or her party".

That retirement came in the wake of intense pressure from some sections of the party for her to step down to avoid a situation where she would be photographed alongside Prime Minister Mariano Rajoy during a parliamentary session on Thursday looking at measures designed to fight corruption, Spain El País newspaper reported.

Spanish media have reported that businessmen involved in the Gürtel scheme paid for designer goods, first communion celebrations and even clowns and confetti for children's birthday parties for the minister and her daughter in exchange for kickbacks.

The judge will determine the exact amount of the gifts which she may have benefited from "shortly" and she may be summoned to appear in court.

Mato was one of the least popular members of Prime Minister Mariano Rajoy's government. She was harshly criticized for her handling of the case of a Spanish nurse who became infected with Ebola after caring for two elderly missionaries who died from the disease at a Madrid hospital.

The Gürtel case is one of a series of high-profile corruption scandals involving politicians of all political stripes, businesses, football clubs and even the king's sister.

Corruption is the biggest concern for Spaniards after unemployment, according to a recent poll by the Centre for Sociological Investigations.

Ana Mato is the second Spanish minister to resign in recent months after former justice minister Alberto Ruiz-Gallardón stepped down in September over his failure to push through tough new abortion laws.