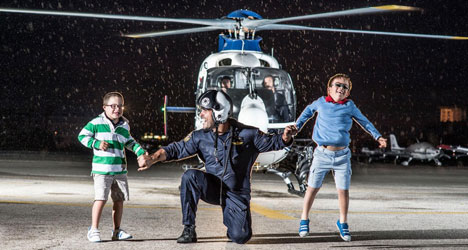 The calendar features children with Down Syndrome in action scenes with police officers from different units. Photo: Carracosa

Orcaray is head of Madrid's UIP riot police. His eight-year-old son, Iker, has Down syndrome.

"I've done it [the calendar] as a father and as a policeman," he told Spainish daily 20 Minutos.

"I'm proud to appear on the cover with Iker. These kids are great, as everyone found out when the photos were being taken. Their learning capacity is impressive, though they're a little slower, and everything you do for them you get back with interest. They're very appreciative," he said.

The 2015 calendar was presented by Interior Minister Jorge Fernández on Wednesday as part of the national police's strategic plan to help vulnerable groups in society.

It is the first calendar to be officially supported by a state security agency at a national level. Fernandez said, "If we can improve the protection and integration of these children at school, at work and in society, we will between us make the world a better place."