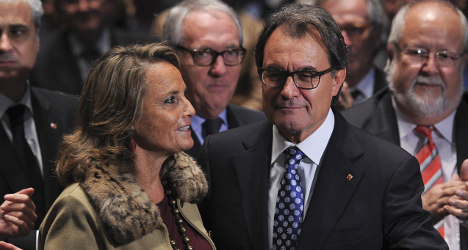 The election, which would involve a joint lists of candidates from all parties that favour independence, is the "only" way to allow Catalans to voice their opinion after a symbolic independence referendum held on November 9th that was opposed by the central government, he added.

The elections would be part of a six-step process which would be completed before the end of 2016 aimed at creating an independent state which Mas unveiled during a speech in Barcelona on Catalonia's future after the referendum.

"The moment has come to use the only tool that we have left to be able to hold the consultation," he said before an audience of 3,000 people who frequently applauded.

"Having gotten so far it would not be understandable that we now stopped on the path we have begun. We need to know with precision if there is a clear majority in Catalonia to have a state or not."

The Catalan leader did not set a date for the early elections in the northeastern region. Elections are not due in Catalonia before 2016.

If the joint list wins an absolute majority, the regional government that emerges would then inform Spain and the international community of "the intent to form a state in Catalonia," Mas said.

The government would then open talk on the terms of separation, prepare the structures of a new state and a "future Catalan constitution," he added.

Once this process is concluded, fresh elections would be called in Catalonia as well as a referendum to ratify the desire for independence on the part of Catalans, Mas added.

"The final decision belongs to the Catalan people, it has to be a direct decision and it can't be (decided) in offices," he said.

Spanish public prosecutors on Friday filed suits against Mas and two other senior members of the Catalan government for going ahead with the symbolic independence referendum despite it being ordered suspended by Spain's constitutional court.

The Catalan government says 2.3 million people took part in the ballot, which was organised by volunteers. That was more than a third of all eligible voters aged 16 and over in the region, according to Catalan estimates, although no official census was conducted.

Roughly 80 percent of those who took part in the symbolic vote said they wanted Catalonia to be an independent state. However the majority of anti-independence voters stayed at home.

Catalonia held the poll after plans to stage an official non-binding referendum were also suspended when the Spanish government challenged its legality.

Mas has hailed the ballot as a "total success". But Spain's conservative Prime Minister Mariano Rajoy dismissed it as a "deep failure" since "two out of three Catalans paid no attention".

Rajoy argues that holding an official referendum would be "impossible" because under Spain's constitution only the central government can call such votes.

Demands for independence in Catalonia, which accounts for about a fifth of Spain's population and economic output, have grown over recent years, fanned by the country's economic crisis.

A majority of Catalans, 60.3 percent, want a reform of Spain's constitution to create a federal state to resolve the conflict, a poll published Tuesday in centre-right daily newspaper El Mundo showed.

Rajoy, who has been criticised by the left, will visit Barcelona on Saturday in his first visit to Catalonia since the symbolic independence referendum.

"I have to explain my reasons better" to Catalans," he said when the trip was announced earlier this month.