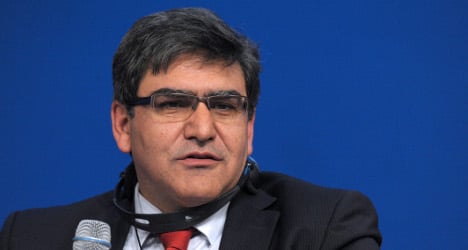 The bank's chief financial officer for the past decade, Álvarez has been promoted to the top management post to replace Javier Marín after his two years in the job, the bank said in a statement.

Several other managers were internally promoted under the leadership of Ana Botin, Emilio Botín's daughter who took over as chairman after his death in September.

Emilio Botín died suddenly of a heart attack after leading the global expansion of the bank during nearly 30 years at its helm.

The new managers will take up their posts in January, subject to regulators' approval.

Ana Botín thanked Marín for his 23 years at the bank, including the past two as chief executive.

"During his two years in this role, he has led the commercial transformation of our bank… while also improving our profitability and efficiency," she said in the statement.

"The financial services industry today faces many important challenges. But Banco Santander is uniquely well-positioned to succeed, thanks to our strong local retail and commercial banking presence in 10 European and American markets."

Emilio Botín was one of the most powerful men in Spain, where critics branded him a symbol of excesses in the banking system which sparked a ruinous property crash — although his own bank survived it.

Santander said its net profit jumped by 52 percent in the third quarter of this year to €1.6 billion ($2.0 billion), due to lower costs and higher earnings in its main markets: Spain, Brazil and Britain, where it bought Abbey National bank in 2004.