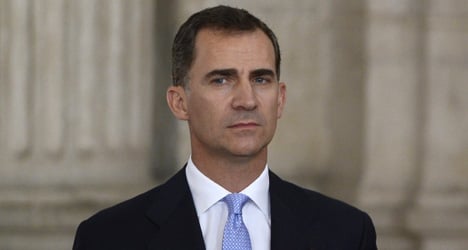 The King called on public authorities and businesses "to drive a new advancement of Spanish science" that would benefit all society. Photo: Gerard Julien/AFP

Accompanied by Queen Letizia, King Felipe told an audience at the 75th anniversary event of Spain's Spanish National Research Council (CSIC) that the country could not afford a "lost generation" of scientists.

Such a loss would be "difficult to overcome and incompatible with the needs of a modern state", the monarch said.

His words contrasted with those of Spain's Education Minister, José Ignacio Wert, who argued last year during a visit to Germany that Spain's brain drain was "not always a bad thing", and in fact could be "one of the best things" to happen in a scientist's career.

The King noted that although the movement of scientific talent in a globalized world was positive, it should not "in any way" happen as a result of "unacceptably high unemployment levels", according to Spanish daily Público.

Recent figures from the European Union show that Spain is among the countries hardest hit by the so-called 'brain drain' effect with thousands of professionals leaving the country in recent years as a result of the economic crisis and soaring unemployment levels.

A survey this week revealed that 60 percent of young Spaniards are considering leaving Spain for work.

The King called on public authorities and businesses "to drive a new advancement of Spanish science" that would benefit all society.

He also highlighted the importance of science and new technologies in innovation and the creation of new jobs and urged everyone involved to work together to "favour the growth of science in Spain".

Scientific research has been one of the areas hardest hit by cuts. The country's research and development spending has fallen to 2006 levels and is almost half that of the EU average as a percentage of GDP.

Last year, researchers across the country held a symbolic minute of silence  to "mourn the death of Spanish science."