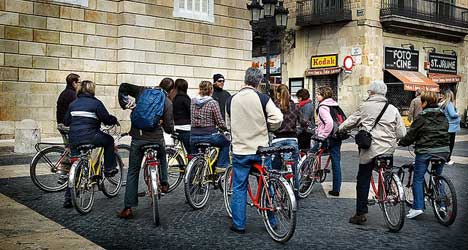 The new rules would also limit the number of cyclists in guided tour groups to 15. Photo: Flickr/Carlos Lorenzo

The proposed changes to Barcelona traffic regulations are aimed at getting cyclists off the city's pavements and onto its roads.

As part of long-term plans to make it safer for cyclists to share the streets with motor vehicles, Barcelona's town hall recently passed an initial draft of new regulations which, if implemented, would see car drivers hit with fines for a wide range of offences.

Honking horns at cyclists, driving too close, harassing them and other as-yet-unspecified forms of 'disrespectful' driving will be punished, according to Catalan daily La Vanguardia.

The nature of those punishments is yet to be specified.

Barcelona prides itself on being a cyclist-friendly city, with a network of cycle paths and 'Bicing', a successful public  bike-hire scheme.

Bicycle tours are increasingly popular with visitors but large groups of often novice cyclists on busy pavements can be a hazard for pedestrians. The current rules allow cyclists to ride on wide pavements, including most of those in the city's popular Eixample district.

To get bikes off the pavements the town hall believes it must make the roads safer. It has proposed to delay banning bicycles on pavements less than 4.75 metres (15.5 feet) wide for 18 months until it has achieves its aim.

New cycle lanes will be built but the town hall is also considering restricting the number of cyclists in tour groups to fifteen, plus three guides.

The initial proposal for fines targeting bullying drivers was approved with cross-party support. The only dissenting group was Spain's ruling Popular Party (PP) who called upon local authorities to punish 'antisocial' cyclists.