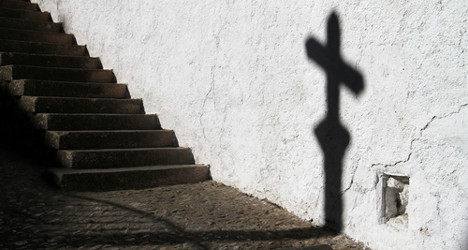 Twelve people are being investigated over their possible involvement in the alleged paedophile ring. Photo of a cross: Shutterstock

A judge overseeing the investigations ordered the arrests of the four men over allegations they had sexually abused at least one minor — a case that came to light after the alleged victim, now 24, wrote to Pope Francis outlining the abuse he had supposedly suffered several years earlier.

The pope reportedly called the victim on several occasions offering support and asking for forgiveness on behalf of the Catholic Church.

A total of ten priests and two laypeople are now being investigated by a Granada-based judge over their possible involvement in the paedophile ring. To date, no one has been charged with any offence.

Among those arrested on Monday — a group originally reported by some Spanish media outlets to comprise four priests — was the alleged leader of the group which is known as Los Romanones, according to Spain's El Mundo newspaper.

"I don't believe anyone can doubt that John Paul II, Benedict XVI and, now, Pope Francis are being incredibly aggressive in their bid to eradicate this type of behaviour from the heart of the church," the minister said.

On Sunday, the Archbishop of Granada Francisco Javier Martínez asked for forgiveness for the "scandals" affecting the church, prostrating himself before Granada Cathedral's high altar, a gesture otherwise reserved for Good Friday.

"The evils of the Church are the evils of every one of us," he said, pleading for forgiveness.

Judicial sources last week told Spain's El País newspaper the alleged sex ring had acted like a sect, with boys supposedly drawn into the paedophiles’ sphere of influence by being taken on as altar boys or assistants.

Court sources said the priests would try to brainwash children in secret meetings, at which sexual matters were discussed and the boys encouraged to perform sexual acts with the adults, who assured them that there was no sin in such encounters.