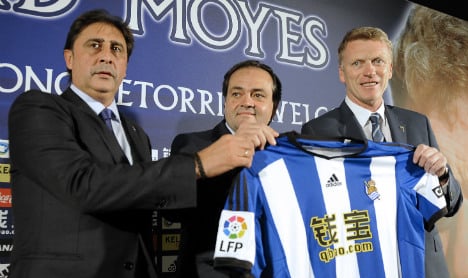 The visitors enjoyed the better of the opening 45 minutes with ex-Arsenal striker Carlos Vela particularly lively as the Mexican saw a dipping effort saved by Depor 'keeper Fabricio and then fired over with the best chance of the first-half.

However, it was Deportivo that enjoyed the best of the second period and Enaut Zubikarai had to be alert to turn Juan Rodriguez's low effort behind seven minutes from time to ensure they returned to San Sebastian with a point.

"It was a great experience and I am very happy to have made my debut in La Liga", said Moyes.

"It is true that I don't know the players that much, but I am delighted to be here and little by little we will improve.

"I wanted to win and I am not happy with the draw because we worked hard, but, in the end, we can say it was a fair result."

A draw moves Sociedad up one place to 14th, but they remain just one point above the relegation zone alongside Deportivo on 10 points from 12 games.

Moyes made four changes to the side that had beaten La Liga champions Atletico Madrid in their last outing, but it seemed he would be vindicated by those alterations as Sociedad made a bright start.

Vela was full of confidence following his two goals for Mexico on his return to international duty for the first time in three years in a 3-2 victory over the Netherlands last week and fired an early warning that Fabricio just reached with his fingertips to turn the ball behind for a corner.

Moyes was then an innocent bystander in a bust up between the two benches as a member of the Deportivo coaching staff was sent to the stands for taking his protests towards the referee too far.

Sociedad continued to press and Vela should have done better when Chory Castro picked him out at the edge of the area, but this time he blazed over.

Deportivo were far more aggressive after the break and would have been in front had Pablo Insua made a better contact when he met a corner at the far post.

Vela had one more chance to put Sociedad in front when he fired into the side-netting on his weaker right foot 15 minutes from time.