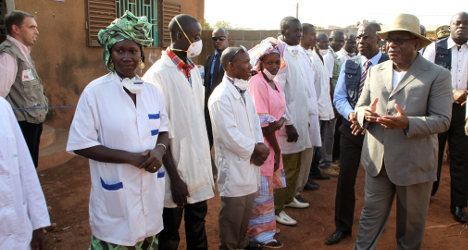 The decision to repatriate the Navarre-born health worker with Spanish NGO Médicos sin Fronteras was taken after she suffered a "high risk" needlestick injury while treating a patient with the Ebola virus on Thursday in the Malian capital of Bamako.

She is not displaying any symptoms of the disease but has been repatriated in specially-equipped plane belonging to the NGO, with the aircraft expected to arrive in Madrid at 9.30 on Friday. She will then be transferred to Madrid's Carlos III hospital where she will be isolated, regional daily Diario de Navarra reported. The medic will be kept in isolation on the hospital's sixth floor for at lest 21 days.

"She is not ill, she is not going to infect anybody and she will undergo preventive quarantine," Fernando Simón, the spokesperson for the Spanish government Ebola emergency committee said on Thursday evening.

"She is not showing any symptoms and there is no change of her developing any such symptoms in the first two days," he said, adding it was impossible to evaluate her risk of infection.

The news of the aid worker's repatriation comes two weeks after Spanish nursing assistant Teresa Romero was released from the same Carlos III hospital after recovering from an illness she contracted while treating two Spanish missionaries repatriated from Sierra Leone.

The latest figures from the World Health Organization show 5,420 people have died from Ebola in the current outbreak, chief in the countries of Liberia, Sierra Leone and Guinea.

Seven people have died in Mail while the government of the country has over 400 people on its watch list.

Spain is not yet officially free of Ebola as the health workers who treated Teresa Romera are still under observation, although all are asymptomatic, national daily El País noted on Friday