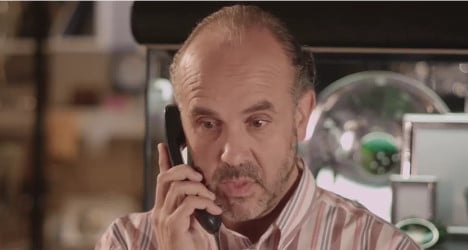 Koldo Losada's face was familiar to Spaniards after appearances in hit TV series including Cuéntame and Águila Roja. Photo: AnaLopezAcotres/YouTube

Jon Ezkurdia, the partner of Losada of the past 20 years, was arrested on Wednesday night in Bilbao on suspicion of murder after the body of his husband was found by friends lying in a pool of blood on the floor of the couple’s apartment. Their dog, a white Westie terrier called Gaston, was also found dead, apparently strangled.

Losada, a 54-year-old whose face was familiar to millions of Spaniards owing to appearances in several hit TV series including Cuéntame, Águila Roja and Amar en Tiempos Revueltos, had married Ezkurdia two years ago, but friends of the couple told the ABC newspaper that they were having difficult times and in the process of separation.

Ezkurdia ran a well-known bar in Bilbao called La gallina ciega (The blind hen), and the couple were often together in the environs of the venue, locals say, having drinks or taking turns to walk their dog. But, local sources told ABC, the bar had been closed since September.

According to La Vanguardia newspaper, Ezkurdia posted a cryptic and what now looks like a sinister message and photograph on his Facebook page a few hours before Losada was killed. Wearing a clown’s make-up with black eyes and a wide red painted mouth, Ezkurdia wrote at 5.34pm on Wednesday: “the blind hen began in silence and will exit the same way. Thank you for everything you have given us”.

Ezkurdia, 54, had spent several hours earlier on Wednesday drinking in central Bilbao with some female friends. Worried about the depressed state of their friend who had apparently said that he had a terminal cancer, this group decided to check in on Ezkurdia at the couple´s home. When they arrived at the building, they found an apparently very drunk Ezkurdia being attended to by an ambulance crew. Alarmed, the women decided to enter the couple’s flat and found Losada’s body, which was reportedly prostrate in the hallway, bloodied and showing signs of a violent attack.

In a bin outside the building the body of Gaston the dog was found together with various objects which looked as if they might be connected with the crime.

“It’s impossible that Jon could have killed Koldo and Gaston,” a friend of the couple told ABC.

“They were always out having a beer together. They were a wonderful couple, and got on really well. We just don’t understand what could have happened,” said a customer at a bar opposite the couple’s flat. “I’ve known Jon for nine years; he’s a very loving man and always quick with a complement,” added a waiter.