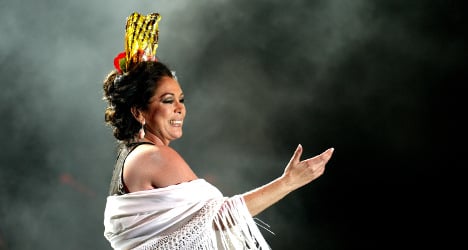 Isabel Pantoja's life has been public property since she began singing as a child in Seville. Here seen in concert in 2007. Photo: Cristina Quicler / AFP

It has been a long and drawn-out farewell for Spaniards as the country’s media waited for the final moment when the singer and gossip-column favourite would enter prison to start serving her sentence for money laundering, handed down a year ago at the end of a macro-trial into corruption in the luxury resort town of Marbella.

The 58-year-old, a fixture of Spain's gossip press who has sold over six million albums, arrived at a women's prison in Alcalá de Guadaíra east of Seville in a car with tinted windows before the glare of a mob of photographers at 7.55am.

According to the newspaper El Mundo, the singer and occasional actress was visibly emotional despite wearing the massive sunglasses she wears on such occasions, particularly when visiting her then-boyfriend, disgraced former Marbella Mayor Julián Muñoz, after he was first imprisoned in 2006.

From Marbella to Malaya

Pantoja was sentenced to two years in prison last year and fined €1.15 million ($1.44 million) after a court found her guilty of laundering money on behalf of Muñoz, a political heir of the flamboyant and corrupt Marbella businessman and mayor, the late Jesús Gil.

Muñoz is currently serving a seven-year prison sentence after he was found guilty of running a scheme that provided building permits in the glitzy Costa del Sol beach resort in return for bribes.

The scandal, baptized “Malaya”, broke in March 2006, two years before the collapse of a decade-long property bubble in Spain which threw millions of people out of work.

Some 50 city officials and business executives implicated in the scandal were imprisoned or given hefty fines.

Under Spanish law prison sentences of two years or less are usually not upheld if the accused has no criminal history, but it remains up to the courts to decide whether or not to suspend the sentence.

Pantoja's son Kiko Rivera, a D.J. and singer, has taken to social media, saying she has been made into a scapegoat and is being treated unfairly. The subject of whether Pantoja, who was found by investigators to have helped Muñoz launder money through the purchase of properties in cash and other methods, had become a mainstay of chat shows and magazine articles over recent months as the Seville-born singer worked her way through the appeals process.

Her imprisonment comes as Spain is rocked by a series of corruption scandals involving politicians of all political stripes, businesses, football clubs and even the king's sister which have fuelled a sense of impunity. It follows the jailing earlier this month of the former president of Spanish football club Barcelona, Josep Lluís Nuñez, for tax fraud.

Of Gypsy descent, María Isabel Pantoja Martín was born in the Seville neighbourhood of Triana, considered the cradle of flamenco. She was a child performer who flourished into a popular solo artist on the back of her talent for coplas, a type of popular Andalusian song that had fallen out of style.

Her notoriety increased in 1983 when she married the famous bullfighter Francisco Rivera “Paquirri”. But a year later he was killed in the ring and the glamorous Pantoja became known as “the widow of Spain”.