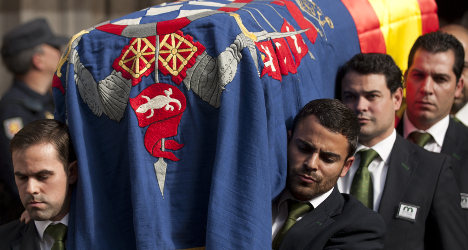 The duchess' body will be cremated and her ashes placed in a side altar of Seville's massive Gothic cathedral, the world's third largest church. Photo: Jorge Guerrero/AFP

People from all walks of life applauded as her casket draped with the red and yellow Spanish flag and the coat of arms of the House of Alba made its way through the streets of the southern city to the cathedral.

"She was a generous person, who helped the needy, noble of heritage and noble of heart," Cardinal Carlos Amigo Vallejo, the Archbishop of Seville, told the congregation.

Known for her frizzy hair and bohemian dress style, the duchess — whose full name was Maria del Rosario Cayetana Fitz-James Stuart — died at her Las Duenas Palace in Seville on Thursday at the age of 88 after being hospitalized with pneumonia.

She last came to international attention in 2011 when the twice-widowed noble danced flamenco at her wedding to her third husband Alfonso Diez, a civil servant 25 years her junior, who she married despite objections from her six children.

Tales of her antics and levity amid the confines of high society filled the pages of gossip magazines and endeared her to Spaniards who dubbed her the "rebel noble".

SEE ALSO: Eight amazing facts about the Duchess of Alba

"I don't know if I was able to tell you how much I love you, loved you and will always love you," read a message by her husband on a wreath of roses that adorned the aristocrat's coffin.

Her widower and six children were joined by King Felipe's sister, Princess Elena and Defence Minister Pedro Morenes at the funeral service which was broadcast live on television.

The aristocrat's casket was put on display on Thursday in Seville's town hall and over 70,000 relatives, public officials and ordinary Spaniards filed past, city officials said.

The duchess' body will be cremated and her ashes placed in one of the cathedral's side altars, dedicated to Cristo de los Gitanos, or Christ of the Gypsies — a patron saint of flamenco dance.

Her principle title was Duchess of Alba de Tormes but she had more than 40 others due to a complex series of marriages by her ancestors, which made her the noble with the most officially recognized titles in the world, according to Guinness World Records.

Her eldest son, Carlos Martinez de Irujo, Duke of Huescar, now becomes head of the five-centuries-old House of Alba, one of Europe's oldest noble families, with her other titles divided up among her heirs.

Just before her third wedding the aristocrat divided up much of her estate — reputedly worth between €600 million and €3.5 billion ($750 million and $4.4 billion) — among her five sons and one daughter.