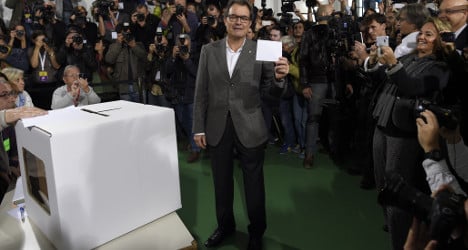 The president of Catalonia's regional government, Artur Mas, showing his ballot before casting it to vote in Barcelona on November 9th. Photo: Lluis Gene/AFP

The office of the state prosecutor-general, Eduardo Torres-Dulce, has presented a formal criminal complaint against Catalonia’s president, Artur Mas, for his role in organizing a non-binding public consultation on whether the region should seek independence from Spain.

Mas is to be accused of offenses such as grave disobedience, abuse of power and misuse of public funds in connection with the ballot, according to the daily El País.

The Catalan parliament had approved a law allowing Mas’s regional government to hold an official referendum, but Spain’s conservative administration led by Prime Minister Mariano Rajoy appealed against this legislation as unconstitutional. Constitutional Court justices accepted the appeal and suspended the law and outlawed plans to hold an official referendum on November 9th.

Artur Mas then admitted that it was impossible to proceed with the vote but said that an alternative “participatory poll”, run by volunteers, would take place instead. Rajoy’s government also appealed against this plan and again the Constitutional Court suspended this watered-down ballot. Mas nevertheless went ahead and challenged Spain’s prosecutors to hold him responsible for the staging of the vote.

Mas said on Friday that it was "very disappointing" that prosecutors will take legal action against him over the referendum which was run by grassroots pro-independence organisations.

"It is sad to see that when the Catalan people want to express their opinion… the reaction of the state comes from the courts and prosecutors," he said during a news conference.

According to the prosecutor-general's complaint, as quoted by the conservative newspaper El Mundo, Mas "put his own partisan vision ahead of the duty to obey the law".

The Catalan government says 2.3 million took part in the unsanctioned vote. Of the 5.4 million voters aged over 16 who were authorized to vote, 1.86 million favoured independence, it said, although though no official census was carried out.

Mas hailed the ballot, which was organised by over 41,000 volunteers, as a "total success" but Rajoy dismissed it as a "deep failure" since "two out of three Catalans paid no attention".

Mas has said that if he fails to reach an agreement with Rajoy over a binding referendum on independence, he could call early regional parliamentary elections that the Catalan nationalist parties would consider a plebiscite.

Since November 9th there has been considerable pressure on the prosecutor-general to set out the terms of a criminal complaint from ruling Popular Party officials.

Now Catalonia’s top court, the TSJC, will consider the possibility of investigating Mas and any eventual charges he might have to face. Other private prosecutors have already lodged complaints against the Catalan leader over the rebel ballot.

In the official prosecutors’ complaint, Catalonia’s deputy president, Joana Ortega, and the region’s education chief, Irene Rigau, are also cited, the latter in connection with the use of public schools all over the region to hold the vote.