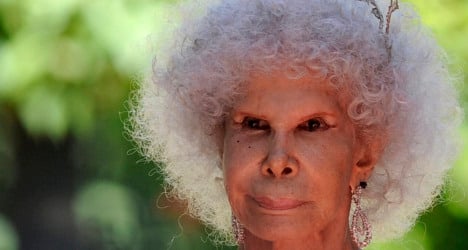 She was admitted to hospital in Seville on Sunday with pneumonia and possible heart problems after having suffered a stomach virus a few days earlier.

Reports earlier in the week suggested the duchess was recovering but on Tuesday, she was taken home to be with her six children and her 64-year-old husband Alfonso Díez.

Read The Local's full profile of the Duchess of Alba here

The announcement of her death was made by Seville mayor Juan Ignacio Zoido on Thursday.

Her body will lie in state in the Andalusian capital, town hall sources told Spain's Europa Press news agency. Her funeral will take place at 12pm on Friday.

Born in Madrid in 1926, the 18th Duchess of Alba had more titles than any other noble on Earth according to Guinness World Records, which lists 57 titles for her due to her complex international ancestry.

Spaniards followed with fascination the story of her last wedding — the third marriage for the twice-widowed duchess.

The duchess had to work hard to overcome the opposition to that marriage by her children, whose own divorces and affairs have for years filled the pages of Spain's gossip magazines.

Díez renounced any claim to the duchess's wealth and just before the wedding she divided up much of her estate among her five sons and one daughter in her will. She kept control over the assets — reputedly worth between 600 million and 3.5 billion euros ($750 million and $4.4 billion) — until her death.

“Nobody pressured me. I am not someone who lets herself be influenced,” she told Spanish celebrity magazine Hola at her luxury home on Ibiza.

After her last wedding, the aristocrat kicked off her shoes and danced flamenco on a red carpet at the entrance of her 15th-century Duenas Palace in Seville, before throwing her bouquet into a crowd of well-wishers.

The Duchess of Alba dances during her wedding to Alfonso Díez.

Her first marriage in October 1947 to Don Pedro Luis Martines de Irujo, son of the Duke of Sotomayor, was described by the New York Times as “Spain's most elaborate social event since the end of the monarchy”.

Six years after the duke's death in 1972, the duchess scandalized Spanish high society by marrying a former Jesuit priest, Jesus Aguirre, who was 11 years younger than her and had been her confessor.

Her speech slowed after an operation in 2010 for water on the brain but that did not stop her from going to Thailand last year with her third husband despite the concerns of her children for her health.

Her vast wealth — it is said she could walk from the northernmost point of Spain all the way to the south coast without ever stepping out of her own lands — made her a target of claims that she enriched herself in part with European Union agricultural subsidies.

The Spanish branch of development charity Oxfam estimates the duchess and her children received €1.80 million ($2.54 million) in subsidies in 2003, according to the latest available figures..