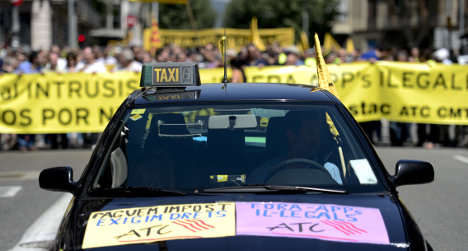 The proposed changes to the region's taxi laws would see the owners of Uber cars forced to pay €6,000 ($7,500) to recover their immobilized vehicles. Photo: Josep Lago/AFP

The proposed changes to the region's taxi laws would see the owners of Uber cars forced to pay €6,000 ($7,500) to recover their immobilized vehicles.

The Catalan government said recently any such legal changes would be included as part of Catalonia's 2015 budget, but with the passing of Wednesday's motion in the parliament — supported by all political parties — those amendments could arrive even sooner.

The motion — which taxi company Elite lobbied hard for according to Spain's El Mundo newspaper — is the latest incident in the battle between Catalonia and the app company with taxi companies saying the service is a source of unfair competition. In June, the region announced plans to fine drivers who use the taxi app as much as €6,000 ($8,000).

The Catalan parliament's motion also comes at a difficult moment for Uber.

Emil Michael, the company’s senior vice president of business, made comments on Monday at a swanky Manhattan dinner event that suggested that the company might consider hiring a team of professionals to dig up dirt on journalists who write negative stories on the company.

He later apologized for the comments, which he said were made at an off-the-record event.

"The remarks attributed to me at a private dinner — borne out of frustration during an informal debate over what I feel is sensationalistic media coverage of the company I am proud to work for — do not reflect my actual views and have no relation to the company’s views or approach. They were wrong no matter the circumstance and I regret them," he said in a statement.

Uber's entry into the Danish market on Wednesday was also beset with problems: within hours of kicking off the service in Copenhagen, it had been the target of police complaint filed by the Danish Transit Authority.

Uber was launched in 2009 and is currently operating in 47 countries.

In Madrid, where the service is also available, authorities have imposed fines from €4,000 to €6,000 which could rise to €18,000 plus seizure of the vehicle in the case of repeat offences.