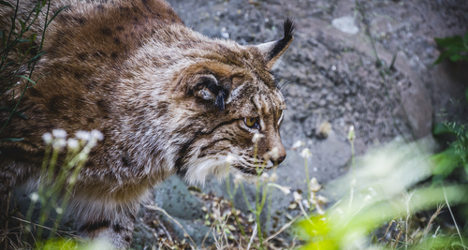 Spain is home to nearly twice as many threatened species as any other European country. Photo of an Iberian lynx: Shutterstock

The Iberian lynx, the Mediterranean monk seal and the European mink: these are just three of the 552 endangered species in Spain, according to the IUCN's 50th annual Red List of Threatened Species.

That figure means Spain is home to nearly twice as many threatened species as the next European country on the list: in Greece, the figure is 286 species.

These statistics are also part of a disturbing global trend with the total number of species on the Red List up 1,125 to 22,413 in the last 12 months. In Spain, four species joined the list, with 214 of those plants.

The latest Red List also arrives just days after the Spanish parliament voted to extend a moratorium on a ban on hunting in Spain's national parks, where most of the country's threatened species find refuge.

The green organizations Ecologists in Action, SEO/BirdLife and the World Wildlife Fund slammed the PP for "caving in to the interests of big landowners".

Spain in 2013 created the new Sierra de Guadarrama National Park, just north of Madrid, bringing the total number of areas in the country with the highest protection to 15. However, the habitat of many animals is threatened with the case of the Iberian lynx being a case in point.

Although efforts have been made to boost the population of the world's most endangered feline, around one in ten animals of a total population of 332 have been run over in Andalusia since the beginning of 2013 with scientists and activists arguing that most collisions happen on roads where no infrastructure has been installed to facilitate and secure animal movements.

Speaking at the launch of the latest IUCN, Director General Julia Marton-Lefevre said: "Each update of the IUCN Red List makes us realize that our planet is constantly losing its incredible diversity of life, largely due to our destructive actions to satisfy our growing appetite for resources."

"But we have scientific evidence that protected areas can play a central role in reversing this trend. Experts warn that threatened species poorly represented in protected areas are declining twice as fast as those which are well represented," the IUCN chief said.

"Our responsibility is to increase the number of protected areas and ensure that they are effectively managed so that they can contribute to saving our planet's biodiversity."