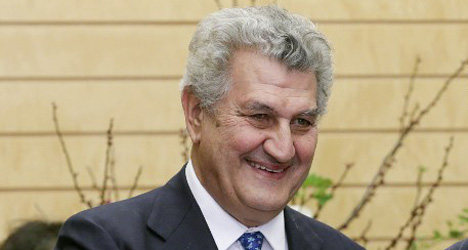 Speaker of the House Jesús Posada announced the transparency deal despite declaring himself opposed to it a week ago. Photo: Kimimas Mayama/Pool/AFP
The pact between Spain's ruling Popular Party (PP) and the Socialists, approved by parliament, means that politicians will have to specify the purpose and destination of any journeys for which they claim expenses.
Travel between Madrid and politician's constituencies will be straightforward and need only be declared, but other trips will be more closely scrutinized.
According to Spanish daily El Pais, trips made to carry out "political activity" will be controlled by each party. If sufficient explanation for the journey is not presented within 15 days, the costs will have to be refunded.
Details of all journeys for which expenses are claimed will be published on the parliamentary website every three months. However, spending figures will be global without a breakdown by party or by individual politician.
Until now, members of both houses of Spain's parliament could travel for free without needing to justify the reason for their journeys.
The agreement comes in the wake of yet another political scandal. It was reported last week that the president of Spain's Extremadura region had allegedly spent public funds on 32 flights to the Canary Islands to visit his attractive Colombian lover.
Speaker of the House Jesús Posada, who last week declared himself opposed to greater transparency, spoke at a press conference to present the new agreement.
"Personally, I think parliament doesn't need to know and publicize the journeys of its members. What we are guaranteeing is that public money is spent correctly," he said.
The centrist UPyD party, meanwhile, did not back the move with party leader Rosa Díez calling the planned changes "clearly inadequate".
Check out The Local's list of Spain's Top Ten Corruption Scandals