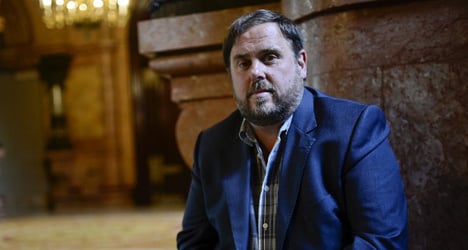 The Catalan historian and politician is a surprise entry in a list that does not include the region's president Artur Mas or Pablo Iglesias, leader of Spain's new Podemos party, which has a seen a meteoric rise in popularity this year.

'A World Disrupted: The Leading Global Thinkers of 2014' is the sixth annual report from the influential international politics magazine, Foreign Policy.

It noted, "When history is written, 2014 will be remembered as a year when remarkable individuals smashed the world as we know it – for better and worse."

The report stated that Junqueras and Salmond 'caused a rethink of the ever-intensifying centralization of power in Europe'.

It added that Junqueras, a professor in modern and contemporary history at the Autonomous University of Barcelona, "helped push the region's president, Artur Mas, into a headlong confrontation with Madrid over independence or at least greater political and economic autonomy".

In the 'memorable facts' about him, it noted that, 'In October, Junqueras, on the verge of tears, called for an immediate referendum on Catalan independence: "We are tired of so many words. What we need are actions, for the love of God; we need actions."'

Junqueras has in the past invoked US civil rights leader Martin Luther King Jr. when calling for non-violent action in support of Catalan independence.

His ERC party is currently ahead of Artur Mas's ruling CiU coalition in the region according to opinion polls.

In the wake of the region's recent symbolic vote on independence, his party ruled out the possibility of a referendum agreed to by Spain's central government. Instead, the ERC has called for snap regional elections followed by a declaration of independence in the case of a parliamentary majority for Catalonia's pro-independence parties.

Foreign Policy's 2014 report highlighted the work of scientists, writers and campaigners from around the world. Politicians in the list included German Chancellor Angela Merkel and Uruguayan President  José Mujica.