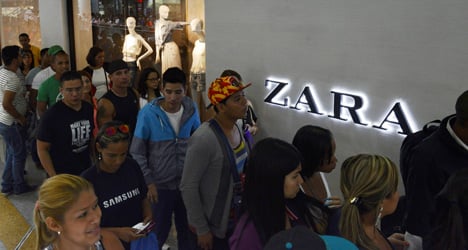 Queues formed to snap up bargains at Zara stores in Venezuela in recent months but there is disagreement on the reason for the new low prices. Photo: Leo Ramírez/AFP

The multinational clothing company owned by Amancio Ortega, Spain's richest man, has introduced the restrictions in response to massive queues at its stores in the South American country after it introduced new, low-cost ranges.

An "avalanche" of clients has descended on the shops in recent weeks according to Spanish daily 20 Minutos, causing crowd problems.

Months of chronic stock shortages were followed by the arrival of new ranges of cheap clothes, triggering a surge in demand, but different media sources gave different reasons for Inditex's cut-price offers.

Colombian newspaper La Republica claimed that a favourable exchange rate had allowed Inditex to offer bargains but Spain's El Mundo reported that Venezuela's government had ordered the company to slash prices by 50 per cent.

Venezuelans will now be limited to five items per month: three for the upper body, such as shirts or jackets, and two skirts or pairs of trousers.

Zara clients will be issued individual ID numbers to track their purchases.

Despite its track record of massive success, Zara was forced to apologize and pull a line of children's clothing from the shelves earlier this year when opponents claimed it resembled Nazi concentration camp uniforms.