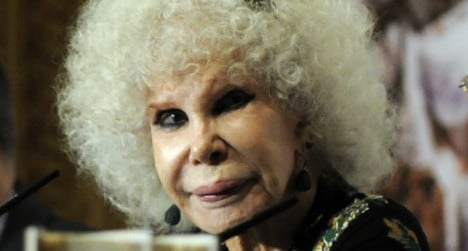 The 18th Duchess of Alba has more titles than any other noble on Earth according to Guinness World Records, which lists 57 titles for her. File photo: Cristina Quicler/AFP

Maria del Rosario Cayetana Fitz-James-Stuart was admitted to the emergency ward at Sagrado Corazon hospital in Seville on Sunday evening.

She was in a serious condition but "not critical" one of her sons said on Monday morning, according to national daily El País.

A doctor treating her added the duchess had had a good night and was "recovering", Spanish news agency Europa Press reported.

The duchess — who says she once turned down an offer to be the muse of Spanish painter Pablo Picasso — last came to international attention in 2011 when she danced flamenco at her wedding to Alfonso Diez, a civil servant 25 years her junior.

Well-known from the pages of celebrity magazines with her frizzy white hair, she lives in the southern city of Seville in one of her various palaces.

"She had suffered a stomach virus a few days earlier but had recovered from it. Now she has pneumonia. At her age, one thing leads to another," a spokeswoman for the duchess's charitable foundation told news agency AFP.

"She is weak," the spokeswoman added. "We are worried because we love her very much."

The 18th Duchess of Alba has more titles than any other noble on Earth according to Guinness World Records, which lists 57 titles for her due to her complex international ancestry.

Spanish media have estimated her fortune at between €600 million and €3.5 billion ($5.0 billion).

Spaniards followed with fascination the story of her last wedding — the third marriage for the twice-widowed duchess — which she admitted caused her to fall out with her children.

In February, an English journalist speculated the duchess could become queen of a newly independent Scotland should it vote to break from the UK in September's referendum.

Peter Osborne, chief political commentator of British newspaper The Telegraph noted that one of the many surnames she carries — Stuart — is the name of the dynasty which once ruled all of what is now Great Britain.

They lost their crown when Queen Anne died childless in 1714 but the line continued in other countries.

Osborne speculated that the current Queen of Great Britain, Elizabeth Windsor, might be forced obliged to give up the crown of Scotland in the event of a "Yes" vote in Scotland's independence elections — a scenario which did not play out.