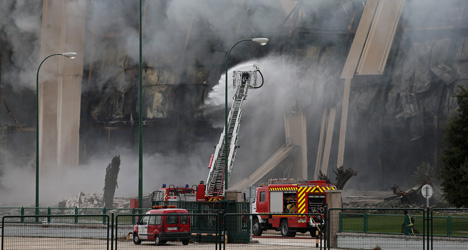 No-one was injured in the blaze but the factory's destruction leave an uncertain future for its 1,000 workers. Photo: Cesar Manso/AFP

The fire broke out at 6.40am in the factory's stew section with two crews brought in to tackle the blaze.

Firefighters said the presence of highly flammable materials, chiefly ammonia, in the plant was responsible for the size of the fire.

Residents of neighbouring districts were warned not to open their windows to avoid inhalation of toxic fumes, the Spanish edition of the Huffington Post reported.

Hundreds of people living close to the factory were evacuated by bus with some temporarily relocated to a nearby sport centre. No-one was injured in the blaze but four people were hurt in traffic accidents connected with it. The city's mayor, Javier Lacalle, implemented an emergency plan and ordered the closure of one of the city's ring roads.

The Campofrio factory is a major source of employment in the area and its destruction leaves its 1,000 workers with an uncertain future, although the company on Monday said it planned to open a new factory in 2016 which would give work to all those employees.

Campofrio is one of the world's largest producers of processed meats, and the Burgos plant destroyed on Sunday produced 100,000 tonnes of food a year.