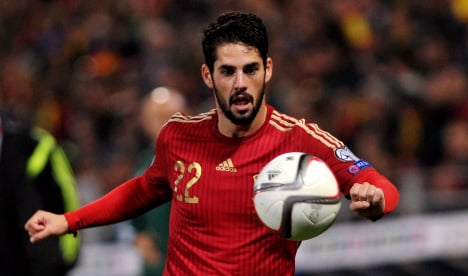 Sergio Busquets and Pedro Rodriguez were also on target as the defending European champions made it three wins from four matches in qualifying Group C to sit level on nine points with Ukraine, three points behind leaders Slovakia.

The likes of Andres Iniesta, David Silva, Cesc Fabregas and Diego Costa were all missing from coach Vicente del Bosque's starting line-up, but Gerard Pique did feature despite falling out of favour at his club Barcelona and Iker Casillas was in goal.

However, Casillas had very little to do in a game played in the Andalusian town of Huelva, home to Spain's oldest club, Recreativo.

And it was a local boy who had the Huelva crowd on their feet in the 18th minute, Isco marking his first start for Spain by collecting possession 20 yards from goal and curling a magnificent shot high into the top left-hand corner of the net.

Spain monopolized possession but took until 10 minutes into the second half before adding another goal, with Atletico Madrid right-back Juanfran again the provider for another Barcelona player, Pedro, to net his 16th international goal.

Del Bosque handed competitive international debuts in the second half to Villarreal midfielder Bruno Soriano, Napoli's Jose Callejon and Alvaro Morata of Juventus and Pedro hit the post late on from a Bruno pass as the hosts almost made it four.

Spain are now unbeaten in 34 home games and can look forward to a glamour friendly with World Cup winners Germany in the north western city of Vigo on Tuesday evening. Their next qualifier will be at home to Ukraine in March.