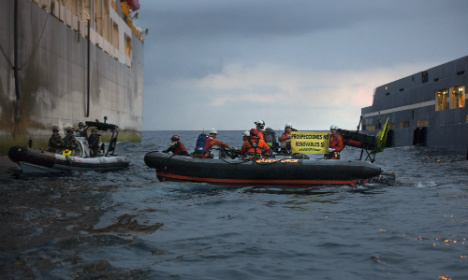 The propeller of a Greenpeace boat cut and broke a 23-year-old Italian woman's leg after she fell overboard during the dawn clash, according to Spanish authorities and the environmental group.

The Spanish defence ministry said the navy believed the activists were trying to board oil exploration vessel Rowan Renaissance, and had moved in to halt three Greenpeace boats. However, the activists say they intended to carry out a "peaceful protest."

"In the events that followed an activist from the ecologist organisation fell in the water and was seriously wounded when she hit a propeller of one of Greenpeace's boats," the defence ministry said.

A video clip of the confrontation released by Greenpeace showed a Spanish navy boat hitting one of the activists' boats, which were very close to the Rowan Renaissance.

Locals and authorities in the Canaries oppose Spanish oil group Repsol's government-backed plan to spend three years probing for oil and gas under the sea bed 50 kilometres from the islands of Lanzarote and Fuerteventura, off the west coast of Africa.

Residents fear Repsol's explorations will harm local flora and fauna such as dolphins and disrupt the tourism industry that is vital to the area's economy. They have tried to stop the prospections going ahead.

The clash with the Spanish navy vesssls on Saturday, came just one day after rallies against the oil exploration were held across the Atlantic archipelago, whose beaches are a popular draw for foreign tourists from Britain, France and elsewhere.