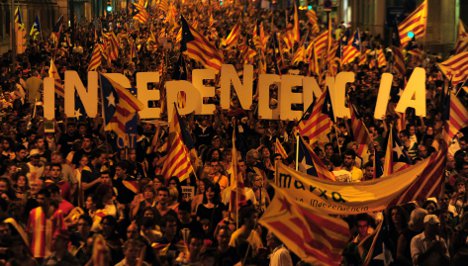 In the week since the ballot, Catalan leaders and the Spanish government have been arguing about whether the vote was a boost or a flop for the independence movement.

The region's government said 1.86 million of the 2.3 people who turned out on November 9th voted for secession.

"You can't belittle that. Two million is a lot of people, about a third of the (voting) population. What's more they have the support of the Catalan government and they are highly mobilized," said Angels Pont, head of pollster Gesop.

But most anti-independence voters apparently boycotted the ballot.

The rules were less strict than for an official vote, with no official electoral roll. The minimum age to vote was 16 rather than 18 and more resident foreigners were allowed to vote than in a normal vote.

Those measures raised the number of people eligible to vote from 5.4 million in a normal election to 6.2 million, making the final number of 'Yes' ballots equivalent to 30 percent of voters.

Pont said the result indicated not much had changed since the last regional election in 2012, when parties supporting independence gained about the same level of support.

If Mas somehow overcame Rajoy's resistance and achieved his aim of holding a full referendum, this support would likely get watered down further, said Jordi Sauret, head of another pollster, Feedback.

He calculated that turnout in such a referendum could rise, with anti-independence voters turning out in force, yielding 45 percent support for independence — short of the majority needed to win.

Support for independence is strongest in rural parts of the rich northeastern region, but is less strongly rooted in the industrial zone around Barcelona and other key coastal areas.

"It will be hard for the nationalists to grow because they have failed in key Spanish-speaking zones where there is a strong Spanish national identity and feeling," he said.

"They should try a different approach there, but it is hard to change people's feelings."

A visitor walking around Catalonia may get the impression that support for independence prevails, as all around hang independence flags: the Catalan red and yellow stripes overlaid with a white star on a blue background.

Pro-independence demonstrations have drawn hundreds of thousands of protesters while rival anti-secession rallies gather tens of thousands at most.

"It is a mistake to confuse the noise in the street with general Catalan opinion, just as it is a mistake to belittle those two million supporters of independence," said Jose Juan Toharia, a sociologist who heads the Metroscopia polling institute.

He called on the Spanish authorities to offer a way out of the deadlock between Barcelona and Madrid — "an alternative to the dilemma of independence versus the status quo".

"If you offer more options, most people would choose to improve their current status, and to be protected against interference from Madrid," he said.

"Catalonia is divided in two, that is the great tragedy," Toharia said.

"For now the other (anti-independence) half is not as well organised. It does not have a high-profile leader. But it is there."