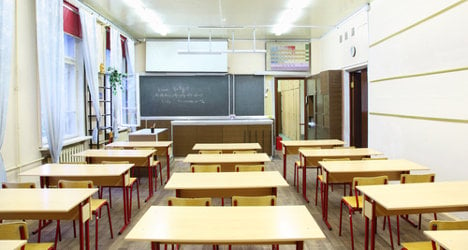 That's down from 24.7 percent in 2012, but still way off the national target of 15 percent and still the highest in the EU, the EU's new Education and Training Monitor reveals.

The latest issue of the yearly report says that the employment advantages of finishing upper secondary education are lower in Spain than in the rest of the EU and that while vocational education and training (VET) opportunities had improved a little, this area was also being affected by harsh cutbacks in spending on education as a whole.

The report acknowledges that “in recent years, measures to fight ESL were put in place at national and regional level”, but then states: “Cuts in the education budget and the reforms to education programmes affected these measures negatively in 2012 (at regional level) and in 2013 (at both regional and central level).”

The study mentions the fact that the battle against school dropouts was a stated priority of the Popular Party (PP) government’s new LOMCE education reform, which has been partially rolled out in state schools this autumn. “The LOMCE offers flexibility in pathways and aims to increase the percentage of students completing upper secondary education and obtaining initial vocational training diplomas though creating a two-year course of basic VET.”

However, the controversial champion of the reform, Education Minister José Ignacio Wert, has come in for huge criticism from the education sector in Spain as his tenure has coincided with deep cutbacks in funding, as part of the PP government’s austerity policies.

Indeed, the Education and Training Monitor notes that “government expenditure on education as percentage of GDP in Spain is below the EU average and has been decreasing since 2009. From 2011 to 2012 it decreased from 4.82 percent to 4.57 percent, reaching 4.55 percent in 2013, compared to the EU average of 5.3 percent.”

The study goes on to note that expenditure on public and private educational institutions per pupil is “higher than the EU average at secondary, post-secondary and tertiary levels of education, but lower for primary education”.

Tracking the impact of austerity policies, the report also notes that teachers’ salaries were cut by five percent in 2010 and frozen in the following two years, despite the same period also seeing their workload increase both in terms of hours and class sizes.

Even an apparent increase in spending slated for the coming year is not all that it seems, according to the report’s authors. Noting that the state budget for 2015 foresees spending of €2.27 billion ( $2.83 billion) on education policies in 2015, both at central and regional level, representing an increase of 4.5 percent compared to 2014, the report adds that “the share of education in the total budget decreased 0.1 percentage points to 0.5 percent”.

The third annual edition of the Education and Training Monitor charts the evolution of education and training systems across Europe. It brings together, in a concise, digestible way, the latest quantitative and qualitative data, recent technical reports and studies, plus policy documents and developments.