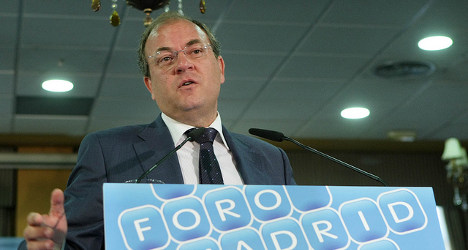 The president of Spains' Extremadura region, José Antonio Monago, said he would not resign and "give in to the bad guys". File photo: PP Madrid/Flickr

The president of the Extremadura region, José Antonio Monago, has hit back against those who have accused the Popular Party (PP) politician of corruption over a large number of expenses-paid, first-class flights that he made to the Canary Islands while he was a regional senator.

In a press conference on Friday, just over a week after the allegations first hit the headlines, Monago, a former firefighter, admitted that during the period from May 3rd, 2009 to November 4th, 2010, he made 16 two-way trips to the Canary Islands paid for with his upper house expenses allowance.

But the politician who holds a doctoral degree in law claimed that all of these journeys were for professional reasons.

He also said he made 22 private trips during the same period — not all to the Canary Islands — all paid for with his own credit card.

Monago, who said he had given his lawyers documents proving the professional nature of his expenses-paid trips, has been accused in the Spanish media of using free air fares to pursue an amorous relationship with Olga María Henao, a businesswoman and PP spokeswoman in Santa Cruz de Tenerife.

Henao, in her mid-thirties, admitted to El Mundo in a rare interview that she had been Monago’s partner for two and a half years. She added that he had visited her in Tenerife, just as she had travelled to Extremadura before the relationship ended "owing to differences in character".

In a sudden whirl of events in the days after the Monago air-fare story first broke, it was revealed that Henao had also had a relationship with another PP official from mainland Spain. Carlos Muñoz Obón, a member of Congress for Teruel province, resigned from his post after it emerged that he had used public expenses for the visits he paid Henao.

Monago reportedly had a marital crisis at the time that he was seeing Henao, but has since said that he and his wife have been reconciled.

Speaking from the Extremaduran government headquarters on Friday, Monago claimed he had been the victim of a "political lynching", adding that he had been denied “the presumption of innocence”.

"Who will pay now for my honour and that of my family?" the 48-year-old thundered.

The Extremaduran leader, who had previously claimed that the trips were work-related but that paperwork to prove that was "impossible" to recover, said that he had now received confirmation from the Senate on the days of the expenses-paid trips and was convinced that all of those Canaries visits were connected to his political activities.

He said that he had met with PP associations on the islands and even mentioned an encounter with a political refugee from the disputed Western Sahara territory.

Monago, a PP moderate who governs his region thanks to an agreement with the leftist IU coalition and who has always maintained that he will not resign and "give in to the bad guys", insisted that his political career was still very much alive. "They won’t shut me up now, even less than before," he declared.