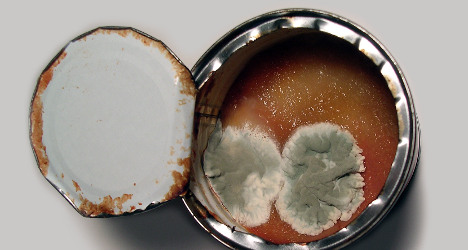 An army officer has revealed in a blog on Spain's publico.es new site that some of his comrades are having to eat food in an unhygienic state, even posting photographs of tins of food containing worms and mould.

In a blog post entitled "Soldiers are not dogs and nor are lieutenant colonels marquises", Lieutenant Luis Gonzalo Segura de Oro-Pulido criticizes what he describes as a continuing spiral downward of conditions for the men in the forces, with food they actually have to pay for now being delivered in a substandard state, while some officers take advantage of their rank and exploit the men in their charge.

He quotes a fellow soldier as saying: "They give us rations which have expired or are about to, with mould and worms inside, even though we have done 41 days of manoeuvres since September and almost haven’t stopped since June".

Segura has become a well-known figure among left-wing circles for his open criticism of the army he serves, even publishing a book Un paso al frente (A step forward), and this is not the first time his blog has caused controversy. Segura was jailed in a military prison for breaching the code of conduct of Spain’s military.in the summer after his book was published.

In his latest post, Segura quotes a soldier as saying that they have to pay €22 ($27.50) per day in food allowance, but the army deliberately trades in almost-expired tinned food so that the military pays next to nothing for the rations. “They report that they don’t know where their [ration] money goes,” the blogger adds of his comrades.

Defence Minister Pedro Morenés has justified the move towards what the government calls “co-payment” for military rations. Arguing that covering 100 percent of the cost of soldiers’ food was itself “an exceptional measure” introduced in 2001 when coffers were fuller, Morenés said  that army chiefs had been asked to take the necessary steps to stick to low budgets and that soldiers were showing “solidarity with Spanish society” by taking this burden on board.

The blogger goes on to describe a high level of complaints from soldiers who feel they are not being supported properly despite being members of an “elite force” and who often have to take on work which is not their responsibility, such as cleaning and other chores. Even worse, according to Segura, is a case in which members of the Emergency Military Unit in Valencia are being ordered to redecorate the home of the battalion’s new lieutenant colonel.

Segura says that it is time that soldiers were allowed to organise themselves in a union, something that is expressly forbidden by law at the present time.