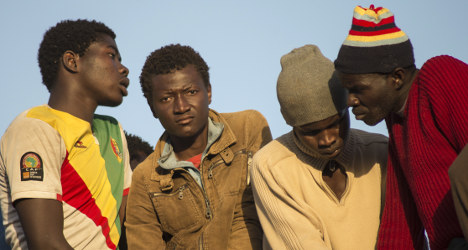 On November 5th, a group of 23 African would-be immigrants made landfall on Spain's Gran Canaria island.

Red Cross volunteers who helped the young men found that six of the men had a fever and called regional health authorities for assistance, concerned about possible cases of Ebola.

Four hours passed before doctors arrived on the scene, during which time Red Cross workers supplied the Africans with food, water and face masks.

When the doctors did show, they cleared the men over Ebola fears. All but four of the men — the most ill — were then taken to a local police station in the back of a rubbish truck. Photos of the episode were seen worldwide.

Now the men have told Spanish national daily El País about their experience from the confines of a refugee interment centre (CIE) on Gran Canaria.

"It seemed like they were scared of us," one of the men told the daily. "Why do they treat us like animals in Europe?"

A man who identified himself as Viky said he had come from the Ivory Coast where, while there was enough to eat, there was a great deal of political tension.

"They say they are going to kick us out of the country but other Africans didn't tell me about this prison," he added.

The recent incident on the beach came amid heightened fears over Ebola in Spain after a Spanish nursing assistant became the first person in Europe to contract the virus while treating two infected Spanish missionaries repatriated from Sierra Leone.

SEE ALSO: There is no risk of risk of Ebola spreading in Europe

It also comes in the context of intense pressures on Spain's land border with Morocco at its North African enclaves of Melilla, with a sharp rise in the number of would-be migrants trying to cross the triple-layer fence and enter Spanish territory.

The Spanish government recently announced it will make it easier for refugees to ask for asylum in Spain's North African enclaves by creating "centres of attention for asylum seekers" at border posts.

The move came after the government was heavily criticized over plans to change the country's Citizen Security Law to allow for the rejection of migrants at the border — illegal under international law.