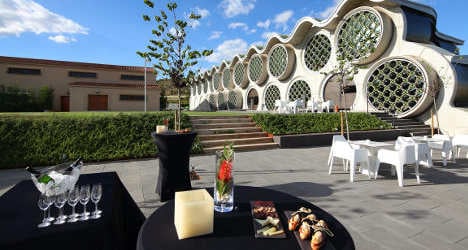 Mastinell produces around 200,000 bottles of Cava a year and Jordi boasts that the vineyard throws away half of its grapes, which aren't deemed good enough.

In case you were unsure of where you are, your hotel room is shaped like a huge cava bottle. The window (the bottom of the bottle) is covered with a circular grate (the bubbles). The hotel door is the cork and it all gives the impression of being a Borrower floating in a magical cava world.

The 11 other rooms around the hotel are similarly shaped, making the building appear like one giant wine rack.

This is the latest attraction in Catalonia’s cava country – a vineyard with a five-star hotel shaped like a wine rack, the finest food this side of Barcelona and an almost limitless supply of award-winning cava.

The hotel – and its neighbouring vineyard – is called Mastinell and it sits a couple of kilometres from the centre of Villafranca del Pendès, the capital of this wine growing region, in the hills 50 kilometres (30 miles) west of Barcelona.

A blind tasting competition for the Royal wedding in 1997 of the Infanta Cristina saw judges chose Mastinall’s brut as the cava for the celebration. It lifted Mastinell, and in particular its Brut, now named Cristina, to fame.

"Before, no one bought this one," says vineyard guide Jordi. "After, sales go like this." He raises his hand up into the dank air of the Mastinell’s cava cellar.

We are three flights of stairs below ground (cava meaning caves — where wine was originally stored before cellars — in Catalan)  and surrounded by hundreds of thousands of bottles which will hit supermarket shelves in a few months.

Mastinell produces around 200,000 bottles of Cava a year and Jordi boasts that the vineyard throws away half of its grapes, which aren't deemed good enough.

Mastinell also keeps its concoctions bottled longer than most vineyards (three years minimum) which makes them less bubbly in the mouth.

The working winery is housed in a brick building opposite the hotel and here Jordi tells all about Mastinell's secrets. How long to store the cava for? Which grapes to mix?

The vineyard describes its hotel is a “work of art” and it’s hard to disagree. It is extraordinary. The presence of the Catalonia capital's most famous architect – Antoni Gaudi – is very much felt.

The hotel, which opened this year after five years of building was designed by Barcelona-based architects Josep Juanpere and Lluís Escamis and it's wavy green roof and huge circular windows are meant to resemble bottles of cava.

It was awarded the Gold Medal at the International Exhibition of Interior Design in Shanghai 2011.

The wine theme continues inside with no room numbers – your place for the night is named after one of 12 grapes.

And those rooms are hugely impressive with great views over vineyards, a luxurious bed and bathroom and a bottle of cava waiting to help you get settled in.

Keeping with the wine theme, the hotel also offers “wine therapy” – not a course for alcoholics – but a spa and massage using grapes “against ageing”.

The second part of the hotel building is a restaurant with some of the finest food in the region.

The menu is in flux, but we tried seven courses including lamb, fish and balsamic vinegar ice cream, all served with cava of course.

Cava is Spain's drink and Villafranca del Pendès, is cava's country. This is marked in the town square where the most prominent building (after a medieval church) is a wine and cava museum called Vinseum. It spreads 8,000 years of the vine’s history over three floors

The Vinseum tells the story of how the grape and the land were almost one and the same from the Bronze Age onwards for the people here.

It then goes on to explore the fine science of wine and advances in the 19th century which led to the first cava being made in 1870.

The more you find out about something the more you can appreciate it – something understood by the Vinseum’s curators who give a free glass of cava or wine to all visitors at the museum's bar, in exchange for your entrance ticket.

Sit and reflect on the complexity of a drink which brings simple joy.

Driving: The E90 motorway runs from Madrid through Zaragoza to Villafranca del Pendès