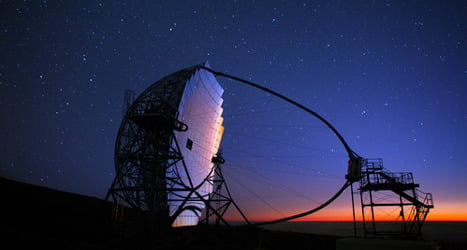 Telescope on the Spanish island of La Palma. Photo of telescope: Shutterstock

Spending on science and innovation is widely acknowledged as a way to invest in an updated or even completely new economic model, but Spain, having been hit by a savage double-dip recession after the bursting of its property boom, is not following this approach.

According to new preliminary figures from the country's official stats body, the INE, R&D spending is now as low in proportional terms as it was in 2006 — at 1.24 percent of GDP.

That compares to a global high of 4.36 percent for Korea in 2012 and a 2.98 percent figure for Germany and Denmark in the same year.

In the latter years of the Spain's boom under Socialist Prime Minister José Luis Rodríguez Zapatero, R&D spending rose to 1.4 percent of GDP, with the target being to catch up with the European Union average, which in 2012 stood at 2.06 percent, according to Eurostat.

But austerity policies under Zapatero and then the current Popular Party administration of Mariano Rajoy have seen that investment subside. The figures released on Thursday break down spending by sector, with public funds for science falling by 4.7 percent, making up a total of 18.7 percent of overall R&D spending. Business investment also dropped but still accounts for over half of all R&D spending in Spain – at 53.2 percent.

On Wednesday the OECD published its annual Science, Technology and Industry Outlook. Among the report’s chief warnings is that several European countries, including Spain and Portugal, are falling further behind their targets for science and research.

The OECD said Spain needs to urgently improve the quality of human resources at all levels, while maintaining support for R&D despite "difficult budgetary conditions was also a priority. Spain also needs to help small innovative companies to grow, while increasing the innovative nature of large firms. Spain must also be better connected to global innovation networks, the OECD stated.

"Spanish efforts (in the last decade) have resulted in an increase in the number of researchers and in scientific production, although figures for 2010 show that Spain accounts for only 3.6 percent of OECD scientific publications," the report's authors noted.