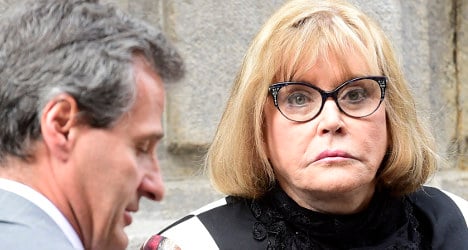 The detention request was received by Spanish police on Wednesday after Argentinian judge María Servini de Cubría asked Interpol to draw up arrest and extradition orders for the 20 individuals.

The Spaniards included the two former ministers Rodolfo Martin Villa, 79, who was an official during the dictatorship and after, and José Utrera Molina, 86, who was housing minister under Franco, Spain's dictator from 1939-1975.

As minister for union relations in transitional Spain, Villa is accused of ordering a police raid on protesting workers sheltering in a church which left five people dead in 1976, according to Servini's ruling.

Prosecutors say Utrera was among the officials who signed the execution order for Salvador Puig Antich, a Catalan anarchist who was accused of killing a policeman.

He said that the crimes exceeded the statute of limitations in Spain, and cited Spain's 1977 Amnesty Law which states crimes committed during Spain's Civil War and under the dictatorship of Francisco Franco cannot the subject of a criminal trial.

However, Villa told Onda Cero radio on Thursday that he did not wish to hide behind a legal "parapet" and would rather testify about the incident. While Spain often argues that all crimes from that period were forgiven in the 1977 amnesty, Villa said that did not cover him: "For that to be the case, I would have to have committed a crime dealt with by that law," he said.

Her case is currently the only open case involving crimes committed during Franco's deeply divisive period in power.