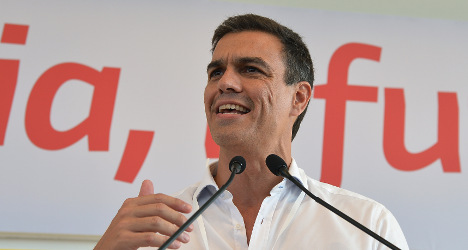 The leader of Spain's Socialist party, Pedro Sánchez, saw his personal website crash during its launch on Thursday. Photo: AFP

When Pedro Sánchez was elected the new leader of Spain's main opposition party the Socialists in July, hopes were high. The party had been struggling ever since it was bundled out of office in November 2011, with many people blaming it for the country's economic crisis.

But the handsome 42-year-old Sánchez has struggled to make an impact with Spain focussed on key issues like the Catalan government's bid for independence and the meteoric rise of the radical left-wing party Podemos.

On Thursday, the Socialist leader made another effort to boost his profile, launching his new personal website which includes details of his political beliefs, a blog, and a section where people can leave messages and feedback.

Visitors to the site can also sign up sign up in support of a cross-party pact on childhood poverty backed by Sánchez.

However, the experiment in branding seems to have backfired with people more interested in the pop-star style photo used by the Socialist leader on the homepage, and by the interesting of designers to leave out the vowels in his name.

So great was the interest in the project, the site even crashed briefly on Thursday afternoon.

Twitter users quickly jumped onto the design with parodies popping up everywhere.