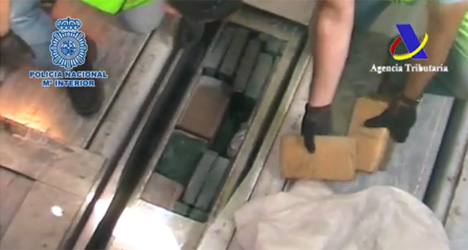 The amount of cocaine seized in Spain by police rose 28.6 percent last year to 27 tonnes, according to official sources. Screen grab: Policia Nacional

The four crew members, all Czech, were arrested and remanded to custody after the raid last Thursday on their vessel about 450 nautical miles (830 km) south-west of Spain's Canary Islands.

The raid netted 599 kg in cocaine.

"The cocaine was in a hermetically sealed container hidden inside one of the boat's water reservoirs," a police statement said.

Spanish media said the boat was coming from South America.