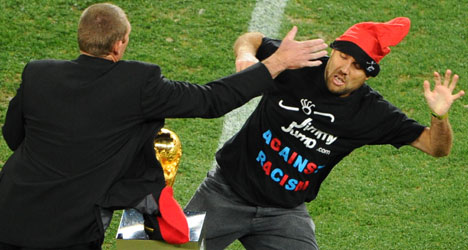 The Spaniard is currently banned from every football match in Spain and Germany until 2016, including even youth and junior leagues, but he recently told Greek sports publication Gazzetta that he plans to 'jump' again… in Greece.

"All the Greeks support me," he said. "They want to see Jimmy again. I'm going to Lisbon again to make a new leap dedicated to Greece."

Jimmy first leapt to notoriety in Greece in the Euro 2004 championships final between the hosts and Portugal. He threw a Barcelona flag at the Portuguese captain, Luis Figo, who had recently left Barça to join arch-rivals Real Madrid.

Jump continued to gain notoriety later in the same year when he ran through the starting grid at the Spanish Formula 1 Grand Prix.

He went on to interrupt innumerable sporting and entertainment events including the Eurovison Song Contest and Spain's Goya Awards ceremony. He claims to streak to raise awareness of racial inequality.

His most high-profile stunt came in 2010 when he attempted to place his trademark barretina, a traditional CataIan hat, on the World Cup trophy moments before the final match between Spain and the Netherlands in South Africa.

"I have no money, "he said. "A court in Spain has decided to withhold 50 per cent of my monthly salary."