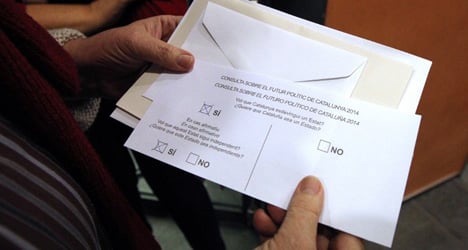 The complex independence debate in Catalonia generates strong opinions on both sides. When given the chance to express them a non-binding poll on Sunday, some voters couldn't resist adding extra comments while others seemed baffled by the whole process.

The symbolic vote — which was fiercely opposed by Madrid — asked voters to respond to two questions. The first was: "Do you want Catalonia to be a state?". If answered affirmatively, the ballot paper posed a second question: "Do you want that state to be independent?".

Over 80 per cent of the Catalans who voted opted for independence but not every vote submitted was valid.

Here are some of the best spoiled papers shared on Twitter under the hashtag #mierdivots.

We want it all…

"Useless. You're worthless [mis-spelled]" This is "worth" loads…

"Long live Franco". I saw and uploaded this from my own voting station

I want us all to respect each other.

There were even some alternative versions of the ballot paper in circulation for those who had extra ideas:

"How would you like it [an independent Catalonia] to be? Free from: corrupt politicians… the troika… illegal debt… evictions…abuse of political power… mass tourism…privatization. Others: civic participation, transparency, separation of powers, laicism, republic"