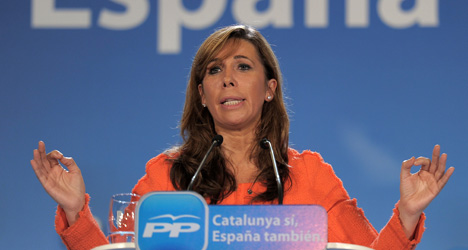 "The time frames of the Public Prosecutor and justice are not those of politicians and the media," Spain's public prosecutor Eduardo Torres-Dulce told journalists.

His comments came after the the head of Spain's ruling Popular Party in Catalonia Alicia Sánchez-Camacho told Spain's Telecinco TV station on Tuesday that the launch of an investigation into the Catalan government's organization of Sunday's vote was "almost finalized".

Camacho said the prosecutor would investigate whether members of the Catalan government were guilty of bribery, misappropriation of government funds and disobeying Spain's courts in relation to their organization of the vote, .

"(Catalan president) Mas thought he could break the law, but democracy has its mechanisms," Sánchez-Camacho said, repeating her earlier comments that Sunday's symbolic vote had been a "farce" without legal standing.

"A red line has been crossed and that is the failure (of Mas) to comply with the resolution of the Constitutional Court," said the politician in reference to the Catalan government's decision to go ahead with Sunday's vote despite a legal block by the court.

But Torres-Dulce appealed for calm, saying Catalonia's public prosecutor would "first look at whether if any crimes had been committed, then determine what those crimes are and finally who might be responsible".

"Up to now there is nothing," he said.

Spanish Prime Minister Mariano Rajoy has not responded officially to Sunday's vote in Catalonia despite pressure from some sectors of his own party to do so.

This silence has made life difficult for the regional branch of Spain's ruling Popular Party and with her own comments Camacho may have felt she needed to appear assertive.

Speaking for the first time since Sunday's vote, Catalan President Mas on Tuesday said he had sent a letter to the prime minister on Monday calling for open dialogue on the future of the Catalan independence process.

"This cannot be resolved in court. We will not be intimidated by the courts," Mas said.

"This process requires less courts and more politics," he added, noting he would be sitting down with Catalonia's pro-referendum parties to see how to proceed.

The Catalan leader said he had "received no word" about a legal suit against his government and added he was "calm, as we have done nothing wrong."

It was "very worrying" that (Spain's ruling party) the PP was "using the public prosecutor as a spokesperson," Mas said.

Critically, Mas also announced regional elections would only be called if these led to a definitive referendum on the issue of Catalan independence.

Sunday's unofficial vote on independence came after Madrid launched an appeal with Spanish courts against earlier plans for a non-definitive referendum.

The vote saw around 2.3 million people go to the polls out of a total eligible voting population estimated to be somewhere from 5.4 million to 6 million.

Some 1.86 million people, or 80 percent of those who voted, opted for independence.