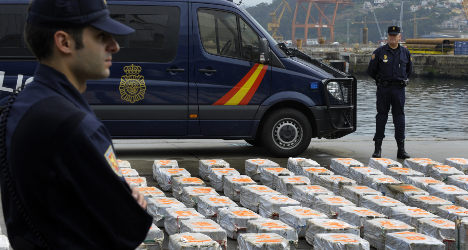 The amount of cocaine seized has been generally declining over the past decade, Spain's interior ministry said on Monday. File photo: Miguel Riopa/AFP

The amount of hashish seized declined meanwhile, the interior ministry said in a statement, detailing its latest annual drug-smuggling data.

The 26.7 tonnes of cocaine seized last year was 28.6 percent higher than the amount in 2012, although the amount had been generally declining over the past decade, it said.

READ ALSO: Why do Spaniards love cocaine so much?

Seizures of hashish declined by 2.4 percent in 2013 compared to the year before, to a total of 319 tonnes, it said. Hashish seizures have been steadily decreasing since 2009.

In 2012, nearly three quarters of all the hashish and more than 41 percent of all the cocaine confiscated in Europe were seized in Spain, according to the ministry's latest data.

"If Spain is the gateway of cocaine and other drugs into Europe it’s purely because of its geographical positioning," Araceli Manjón Cabeza, former technical director of Spain’s National Plan against Drugs and currently a professor in criminal law at the Complutense University of Madrid told The Local recently.

"Whether it's cocaine from Latin America or hashish from northern Africa, we’re just the ones closest. Galicia (northwest Spain) already had the infrastructure for tobacco smuggling, allowing local drug traffickers to work with South American drug cartels from the 90s on.

"We also have a lot of coast, which may explain in part why there are so many drug heists in Spain," she added.

More than 13 percent of Spaniards between the ages of 15 and 34 have tried cocaine at least once in their lifetime, an EU drugs report from 2012 states.

That's the highest figure for the EU: the average is 6.3 percent.