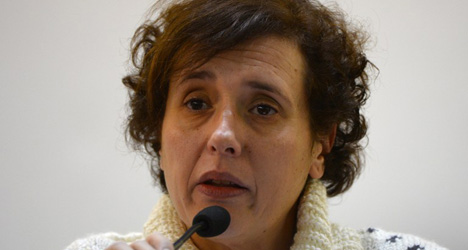 Spanish nursing assistant Teresa Romero has said she will donate the money to charity if she wins her case. Photo: Gerard Julien/AFP

Madrid's health chief, Javier Rodríguez, angered a large part of the Spanish population and even caused divisions within his party, Spain’s ruling Popular Party (PP), when he made a series of unfavourable comments about Teresa Romero while she was fighting for her life in hospital.

Romero became infected with the Ebola virus while volunteering to help with the treatment of a repatriated priest but the 70-year-old official said that Romero may had lied about how she contracted the virus.

Rodríguez then made the situation worse with remarks such as "you don’t need a Masters to learn how to put on and take off a suit" or "some people are better at learning than others".

The regional health chief for Madrid eventually came close to apologizing, describing his comments as "unfortunate" but Romero's legal team, Garzón Abogados, say that that is not enough.

According to Catalan daily La Vanguardia, they have presented a demand for €150,000 compensation to help "clean up Teresa's image".

Romero has indicated that she will donate the money to animal protection charities if she wins the case.

Her own dog, Excalibur, was put down by Spanish authorities as a precautionary measure while Romero lay in hospital. An animal rights group has presented a petition demanding the resignation of Spanish Health Minister Ana Mato who oversaw the decision.